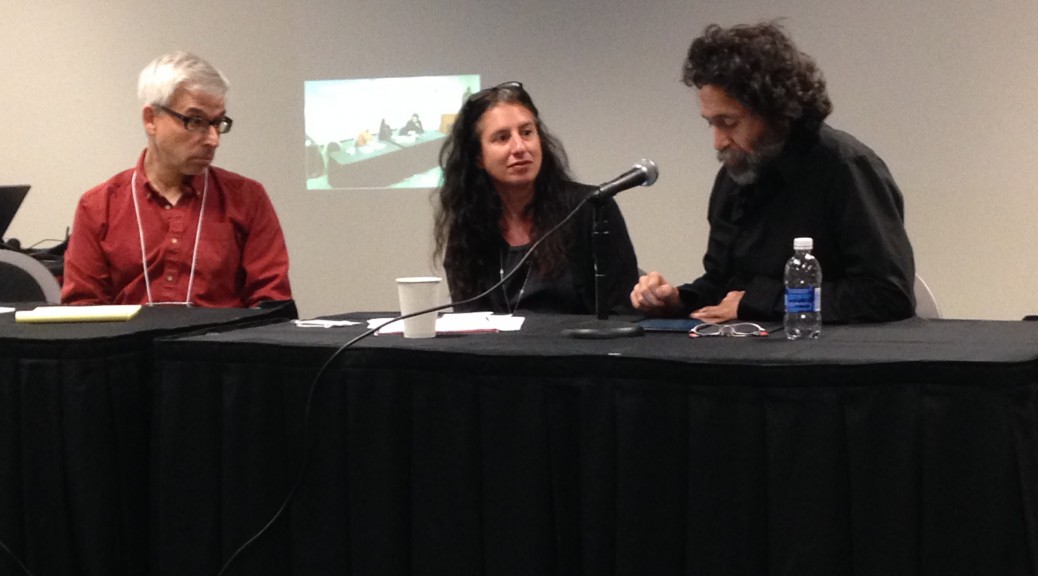 On April 23rd and 24th 2015, the Program in Comparative Literature hosted its biennial international conference at Alexander Library Pane Room. The general topic of the event was the relation between literature and religion. The conference was the culmination of a seminar, offered during the spring semester, in which graduate students had the opportunity to prepare for the conference by reading and discussing the works of the invited speakers. The seminar was taught by Professor E. Efe, who also organized the conference by drawing together scholars from different countries and cultural backgrounds, whose research has focused on the complex entanglement between literature and religion.

After the welcome address by Professor James Swenson, Dean of Humanities, Professor Efe introduced the series of subtopics of the conference, perfectly condensed in the title “The People of the Book, People of Books:” people as communities who live by the book (the religious book), or by books; that is to say, the chosen people versus the modern readers of books in general. But also national, secular, and religious communities built on what remains fundamentally literary. Finally, real people created by books—as in the case of the “Orientals”—and fictional characters created by real people. As Professor Efe remarked, the conference was thought as an opportunity to delve into these questions and into their multiple historical and political connections from different perspectives. 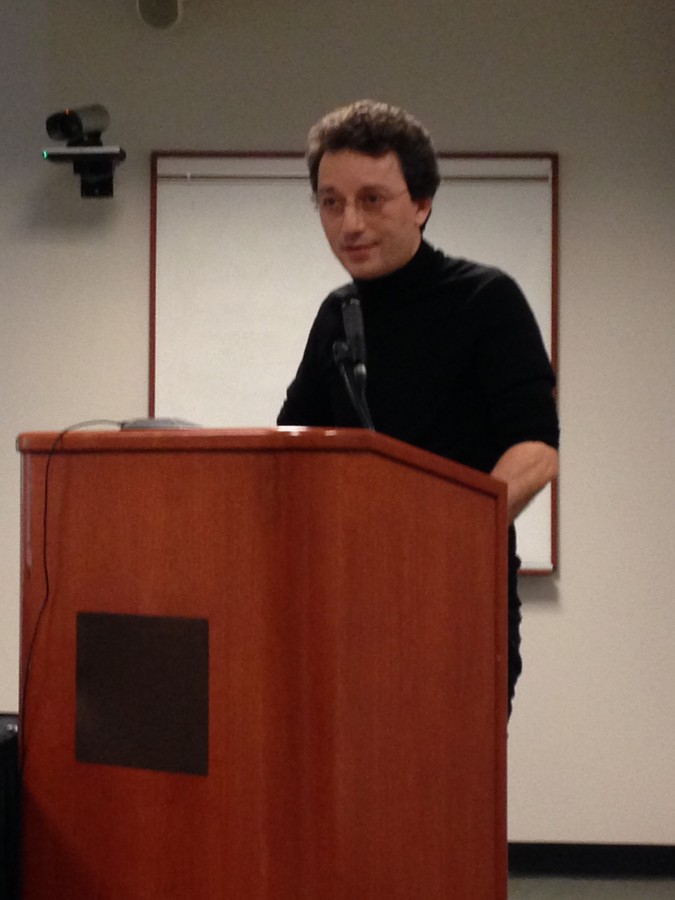 The keynote talk was delivered by Professor Gil Anidjar (Columbia University), who presented a paper titled “Sparta and Gaza (What Have They to Do with One Another?).” The paper was part of Anidjar’s future project, which stems from the surprising absence in literary and religious scholarship of “weaponology,” that is to say, a science of weapon. Drawing from religion, philosophy, and literary theory, Anidjar discussed the weapon in its complex stratifications of meaning: a weapon as a tool, as both the doer and the deed, as a means and a medium of description—words as weapons—and destruction. From the first Biblical murder of Cain to the wall of Gaza, Anidjar explored the question of what a weapon is, where it begins and where it ends, how it can be conceived as proper of man, in all its oblique and diversified materialization. Rather than from the perspective of vulnerability, Anidjar’s provocative talk was meant to be a reflection on how the human constitutes itself through offensive and aggressive practices.

Professor Emily Apter (New York University) presented an essay titled “Theopolital Fragments: Auerbach, Benjamin, Derrida, De Man” in which she engaged with the conundrum of sacred language as something un-understandable, hence untranslatable. Starting from the notion of “theotropic allegory,” a concept invented by De Man to indicate sacred figurative language, Apter focused on the theorization of figural language by Auerbach and on De Man’s reading of Benjamin’s essay “The Task of the Translator.” Through an acute analysis of secular and religious language and of Benjaminian messianism and nihilism as commented by De Man, Apter’s talk demonstrated the relevance of a theotropism, of the unintelligible and the untranslatable in opposition to the supposed transparency of secular and utilitarian language.

Professor Amon Raz-Krakotzkin (Ben Gurion University) delivered the third and last talk of the first day (“The Bible, the Oral Torah and the Messiah”), in which he discussed another potential kind of Messianism, based on the Mishnah, which established an imagined community of the Jewish Law: most importantly, a community that rejected nationalism for a peculiar notion of exile within the land. Through the articulation of this counter-Messianism (without a Messiah), Raz-Krakotzkin proposed it as an alternative to Zionism, that is to say, to the Christianization and secularization of Messianism that continues to prove its complicity with colonialism.

The first day was concluded by a vibrant roundtable, in which the speakers were joined by Talal Asad (CUNY). The questions raised during the day became an occasion to discuss their relevance for contemporary conflicts, not only in the Middle East. Although everyone agreed on the impossibility to think of the sovereign state without the sovereign subject, different opinion on whether the absence of the sovereign can still be imagined contributed to a fecund and stimulating conversation. 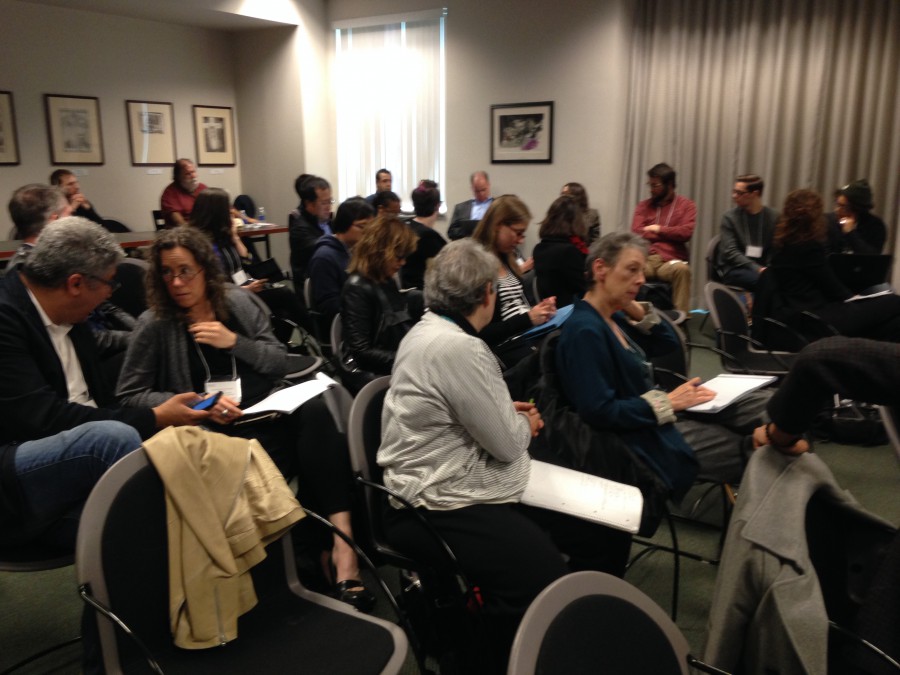 The second day of the conference, April 24th, coincided also with the 100th anniversary of the Armenian genocide, as Professor Marc Nichanian (Sabanci University) pointed out before giving his lecture, titled “The Subject and the Survivor.” The discussion that concluded the precedent day and the remembrance of one of the several catastrophes of modernity constituted the background of Nichanian’s talk, in which he expounded upon the figure of the survivor after the revolution of the subject (between Rousseau and Kant), which gave birth to the formation of the modern sovereign individual. By reading George Bataille’s oeuvre vis-à-vis Maurice Blanchot’s The Madness of the Day, Nichanian called for a phenomenology of the survivor. In particular he contrasted the survivor as a witness—and a sovereign subject—to the absolute survivor, who withdraws from its own sovereignty by refusing to speak and to offer its testimony to the historian or the philologist. This last man, this absolute survivor, fictionalized in Blanchot’s novel, was proposed by Nichanian as a strictly literary alternative to the modern ways of commemorating genocides and catastrophes.

Professor Sarah Hammerschlag (University of Chicago), in her talk titled “Literature and the Political-Theological Remains,” investigated the intersections of philosophy, literature, and politics in Derrida, suggesting that his work offers a literary alternative to political theology by proposing a form of politics that rejects sovereignty. By focusing on two essays collected in the book Rogue, Hammerschlag identified literature as a practice able to divest itself of authority, as an interruption of sovereignty, and as a suspension of violence.

The following roundtable, in which the speakers answered several questions from professors and students participating in the conference, delved into questions of sacralization and secularization in their substantial political implications. The discussion of art (and literature) as the condition of mythology and, vice versa, mythology as the origin of art, cemented the connection already examined in the precedent day between the religion of art, the birth of sovereignty, and the national state.

The two day conference proved to be a successful attempt to put in dialogue scholars from different disciplines around a core topic—literature and religion—that allowed for diverse directions of inquiry. Thanks to the acute reflections of the speakers and to the attentive response of the public, the conference demonstrated the importance of understanding the religious basis of modern subjectivity and contemporary politics, as well as the decisive role of literature within the complex dynamics of their interaction.