This year,  three new graduate students join the Comp Lit community. I recently had the privilege of speaking with them and getting to know more about their backgrounds and interests. Welcome Gabriel, Maria Elizabeth, and Coco! 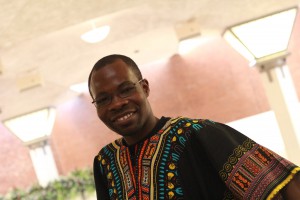 Gabriel Bamgbose is a published poet and Fulbright scholar. While studying English at Tai Solarin University of Education in Nigeria, Gabriel took creative writing courses as well as literature courses, which helped him develop his poetic voice. He began publishing his poetry in literary journals and in 2014 he published his book Something Happened After the Rain. He is also the founding editor of the Ijagun Poetry Journal, an online international poetry journal. Gabriel also holds an M.A. in English [Literature] from the University of Ibadan. Before beginning the Ph.D. in Comparative Literature, Gabriel spent a year as a Fulbright scholar at NYU. He taught Yoruba language and culture and enrolled in graduate courses in Africana Studies. Gabriel’s research interests include African women’s writing, poetry, postcolonial theory, and feminist theory. He sees his creative writing as another way of doing theory and often uses his poetry as a different way of engaging in critical work. 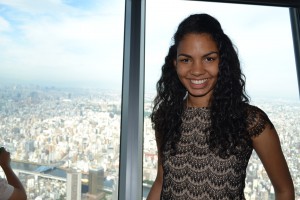 When Maria Elizabeth Rodríguez Beltrán began studying at CUNY after moving to New York from the Dominican Republic, she took courses in a wide variety of disciplines. She realized that all of the courses that interested her, despite the diverse subject material, had one thing in common: excellent professors. This discovery led her to pursue a career in teaching. As an English major, Maria Elizabeth began to study the work of Frederick Douglass and other slave narratives. The study of the Civil War was completely new to her, and she says, “I fell in love with it.” In addition to written slave narratives, she also became interested in visual culture including pictures and paintings depicting slavery. Then, a professor recommended that she take a course on the Greek and Latin roots of English to improve her language skills. That course sparked an interest in the origin of words, and Maria Elizabeth began to study Latin, eventually pursuing a double major in English and Classics. At Rutgers, Maria Elizabeth plans to continue to develop her interests in slavery and visual culture. She also hopes to expand her research to earlier time periods and geographical areas in order to study visual representations of slavery in the Caribbean and South America. 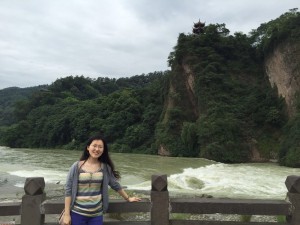 Coco Ke Xu has been surrounded by international literature from a young age. She recalls reading classics like Les Miserables and Oliver Twist at a very young age under the influence of her parents. Coco studied English Literature at Sun Yat-Sen University in China, where she also had the opportunity to study other languages including French and Latin. In her third year, Coco participated in an exchange program and spent a year studying German intensively in Cologne. While in Cologne, she also took courses in the English department, in particular a class on Heidegger and the poetry of being. Through this course, Coco became interested in seriously studying literary theory. Upon returning to Sun Yat-Sen University, Coco continued to develop this interest by auditing courses in the philosophy department. At Rutgers, Coco plans to pursue research in translation theory. She is interested in studying the challenges of transcultural and translingual communication and in particular how to respond to these limitations.