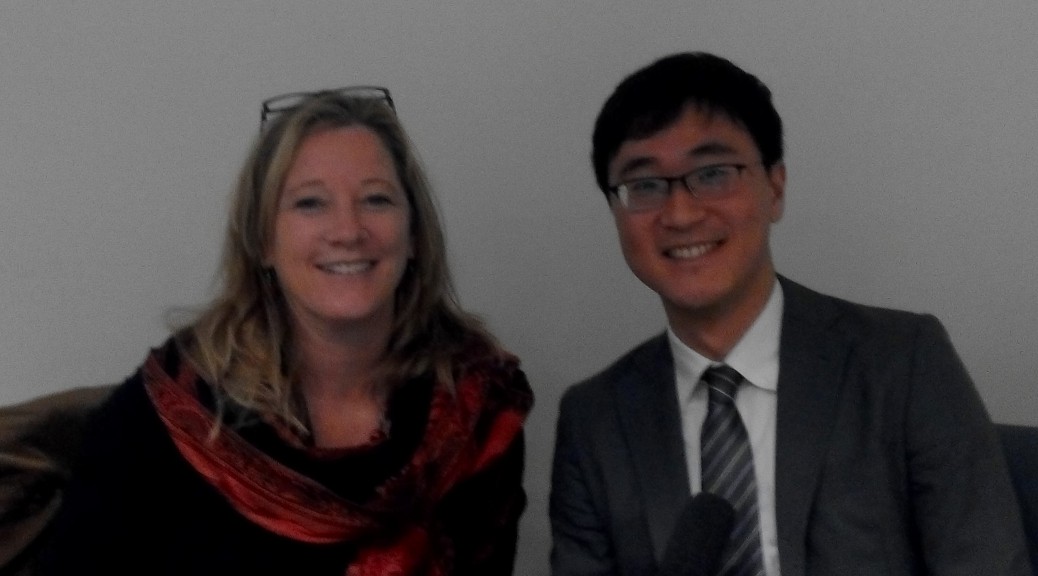 The Teleconference Lecture Hall of Alexander Library was the space for the intellectual discussions on “Caribbean and Pacific Studies: Archipelagic Thinking Beyond Area Studies” on November 10 hosted by the Center for Cultural Analysis as part of the Archipelagoes Seminar Series. The seminar was moderated by Prof. Yolanda Martinez-San Miguel who introduced the two presentations by Profs. Elizabeth DeLoughrey (Department of English, University of California, Los Angeles) and Koichi Hagimoto (Department of Spanish, Wellesley College), an opening that set the stage for the discussions on the tension between area studies and archipelagic thinking.

The first presentation titled “‘Moments in Passing:’ Maritime Future of the Anthropocene” by Elizabeth DeLoughrey situates the archipelago as an epistemic force. The crux of the presentation is the problematic relationship between human and nature (non-human). DeLoughrey marks the shift in the oceanic imaginary in the 21st century which pushes from the surface to the submarine, a space of transformation where the idea of a unitary species is erased. Moreover, the shift to “what happens beneath the surface” aims for an understanding of the human that challenges the anthropocene discourses that imagine the human as a singular species. The presentation rethinks the boundary between the anthropocene and the oceanic within the crucible of “sea ontologies” and “the oceanic uncannies.” Just as the ocean is an archive of memory and history “outside and below the official archive,” the human is “a bit planet of ocean.” DeLoughrey argues that the future of the anthropocene lies in what she calls “multi-species relations or alliances” through an engaged discussion of submerged arts/water sculptures (see Jason deCaires Taylor’s works: http://www.underwatersculpture.com/) that rematerialize the oceanic space to showcase multi-species collaboration.

The other presentation for the day by Koichi Hagimoto is titled “Dimension of Archipelagic Culture in the Writing of Jose Rizal and Jose Marti.” The presentation centers on the argument that it would be reductive to see the writing of Rizal and Marti as necessarily nationalistic because the articulation of archipelagic culture in their work offers a model that transcends the nation-state imagination and deconstructs imperial history. Through the lens of archipelagic studies, geopolitical perspective, and island studies, Hagimoto examines the unique relationship of the islands to the world through the “oceanic spatial turn in area studies.” This framework allows for the conversation between the Philippines and Latin American studies with critical focus not only on national and colonial narratives but also historical and cultural narratives that interrogate Western epistemologies of “islands without culture.”  Island studies provides a model beyond area studies and allows for intercultural relations. The comparative reading of Rizal, the Filipino writer, and Marti, the Cuban solider-poet, shows that both writers celebrate tropical culture with references to the cuisine, nature, and language as they symbolize anticolonial gestures. Rizal emphasizes that the Philippines as “ocean of islands” (7000 islands) are not isolated, but their fluidity and cultural relationality undermine the notion of fixed identity. Marti’s representation of the Antillean confederation engages the Caribbean landscape and inhabitants, as well as relations between land and sea, human and nature, war and death. Hagimoto concludes that Rizal and Marti present transoceanic ideas in the late 19th century. Archipelagic culture is more open and diverse than the static, fixed models of the nation-state.

The seminar received generous support from the School of Arts and Sciences, as well as multiple departments, programs, and research centers and institutes.

One thought on “Caribbean and Pacific Studies: Archipelagic Thinking Beyond Area Studies”