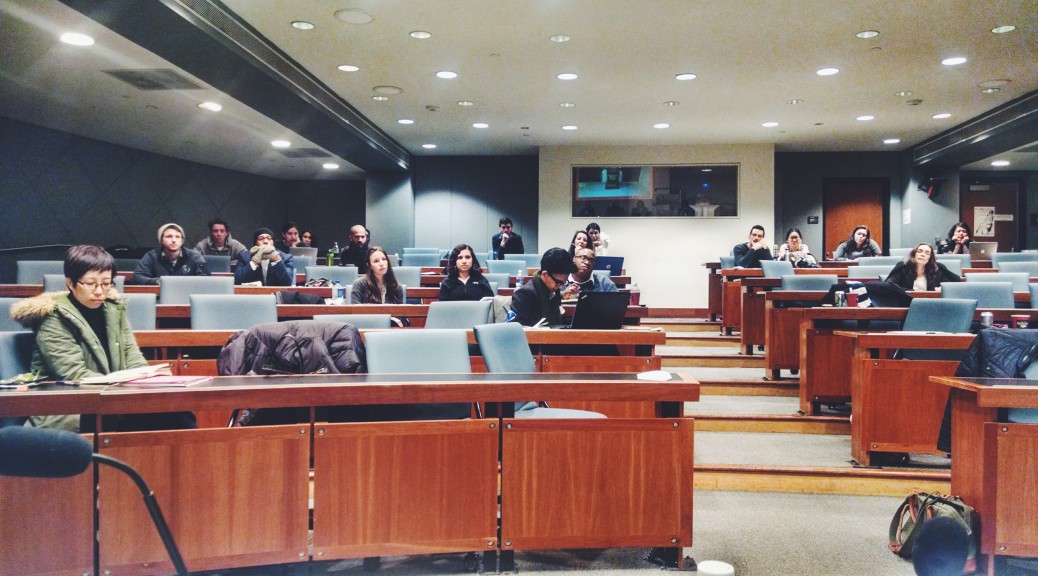 By: Rafael Vizcaíno and Jeong Eun Annabel We

On March 3, 2016, the graduate students of the Rutgers University Program in Comparative Literature held their biennial conference. This year’s conference, titled “Urban (De)Coloniality and Literature,” sought to push back against what we (the co-chairs) thought was a limited reception of the project of decoloniality within literary studies (e.g. that the project is geographically restricted to the Americas, temporally restricted to the 15th and 16th centuries, and heavily dependent on Hispanophone contexts). We also wanted to uphold comparative literature as an institutional space within the U.S. university where divergent forms of knowledge production can meet to analyze a specific issue of social relevance. The conference participants brought together ethnic studies, women and gender studies, area studies, philosophy, history, anthropology, religious studies, indigenous studies, as well as literary and cultural studies. They were invited to focus on an aspect of coloniality that in our view remains understudied: the coloniality of the city, as reflected in patterns of gentrification, mass surveillance, and the criminalization of racialized populations.

The first panel, “Remapping the Urban and Reclaiming Lives,” examined different decolonial imaginaries emerging from urban settings, ranging from San Francisco’s Mission district’s Chicanx public art, French-colonial plantation cities and Maroon utopianism, and Canada’s settler-colonial urban space unsettled by the Idle No More movement of First Nations peoples. Cynthia García (Stanford), Fadila Habchi (Yale), and Allyse Knox (Stony Brook) challenged the colonial intensifications of these urban spaces and offered for our analysis the multiple media through which a decolonial reclamation of the city might take place. As the panel’s discussant Professor Dinzey-Flores (Rutgers) highlighted, the physicality and materiality of space serves as a necessary context to analyze this endeavor. The second panel, “Genealogy and Decolonial Epistemology,” brought together different trajectories that have inspired decolonial work: Native kinship and intimacy, the moment of Pachakuti (rupture), and Black women’s creative (“demonic”) possession of space. Invigorating and also challenging other genealogies of decoloniality, Nicole Eitzen Delgado (NYU), Gabe Sanchez (Albany), and Alexandria Smith (Rutgers) demonstrated the contribution of wide ranging theoretical and practical sources to decolonial thought. Comp Lit’s very own Professor Yolanda Martinez-San Miguel (Rutgers) was this panel’s discussant. Raising the methodological question of comparison vs. relationality, she urged us to attend to the fundamental opacity in this epistemic endeavor. The third panel, “The Anthropological of the Inter-Space” further reflected on interdisciplinarity as the discussion focused on how anthropological subjects get created in in-between-spaces. Spaces considered were the New World, Okinawa’s military bases, and taxi dance halls in the 1920’s U.S.A. Dana Francisco Miranda (Connecticut), Ariko Shari Ikehara (Berkeley), and Monica Stanton (Princeton), pushed one another to address different time periods and modalities of control and invention in inter-spatial contexts. Professor Carter Mathes (Rutgers) traced “Man as the glue to anthropological normativity” in all three papers and offered additional contexts to consider, such as the (super/sub)human otherness of racialized subjects, as seen recently in Darren Wilson’s description of Michael Brown. The last panel, “(De)Colonial (Ab)use of the Theological and the Spiritual,” both credited and challenged secular and non-secular foundations of decoloniality. Lucas de Lima (UPenn), Foster J. Pinkney (UChicago), and Daniel José Camacho (Duke), traced queer, anti-violent, and indigenous deployments of liberation theology and spiritual practices. Their papers illustrated the importance of furthering a critique of both secularism and of theology’s complicity with coloniality in a global and comparative/relational perspective. Professor Carlos Decena (Rutgers) offered an intense and provocative discussion on the limits of theologies of liberation and the need to further look at their often covered over queer underside. Professor José David Saldívar (Stanford) was the conference’s keynote speaker. His talk, “Negative Aesthetics and Junot Díaz’s The Brief Wondrous Life of Oscar Wao,” proposed that a negative aesthetic found in Díaz’s work helps explain the global presence of U.S. ethnic literature. Professor Saldívar began by sharing his on-site research in New Jersey since Díaz himself lived in Parlin, NJ, and attended Rutgers College as an undergraduate. Rutgers Comp Lit graduate students Carolyn Ureña and Enmanuel Martinez offered responses to Professor Saldivar’s talk. The ensuing discussion touched on Dominican Republic’s place within the modern/colonial world as well as the relation between the concepts of americanity and coloniality. The critically interdisciplinary exchange the conference generated reflexively encourages us to expand the theoretical frameworks of comparative literature as a discipline. Moreover, it urges us to expand the scope of decoloniality as a critical-intellectual project connected to social movements throughout the world. As Rutgers celebrates its 250th year anniversary, the themes of this conference also speak to Rutgers’ own colonial history and the ongoing gentrification of New Brunswick. Committed to various communities and projects, the conference presenters and participants were able to use this conference as an occasion to share research and insights across disciplinary boundaries and physical distance. The conference gave all of us a glimpse of the exciting work of emerging scholars, work that speaks to many of our current predicaments and signals a new generation of researchers who seek to challenge existing modes of thought and stimulate new conceptual frameworks and social movements.

We would like to once again express our deepest gratitude to all presenters, organizers, discussants, administrators, and university staff, without whom the conference could not have materialized. The same goes for our sponsors: The Rutgers Graduate Student Association, The Centers for Global Advancement and International Affairs, The Program in Comparative Literature, The Department of Latino and Caribbean Studies, The Department of Asian Languages and Cultures, The Advanced Institute for Critical Caribbean Studies, and The Department of African, Middle Eastern, and South Asian Languages and Literatures.