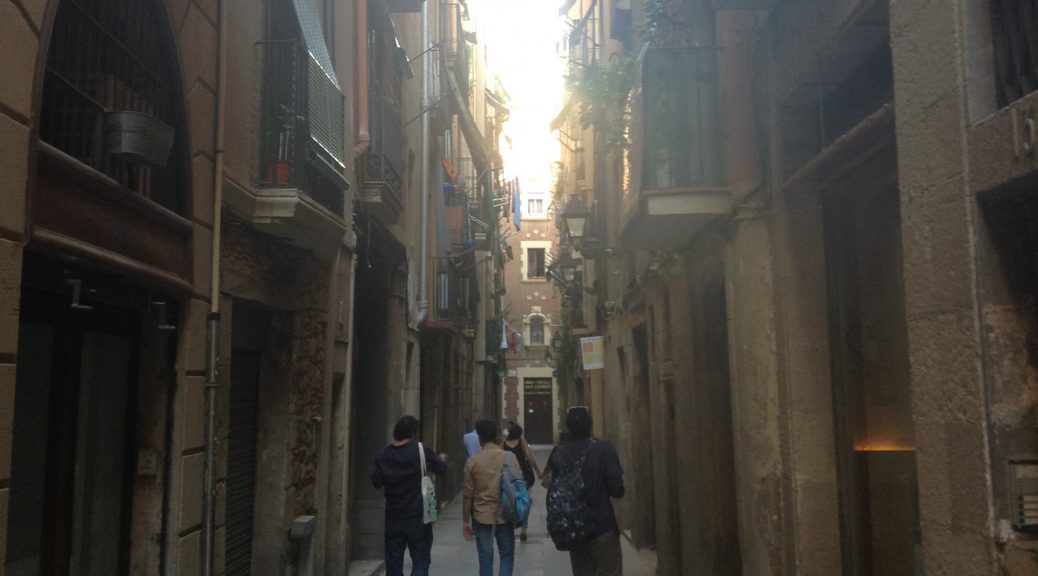 From July 11 to July 21, 2016, I attended the Decolonizing Knowledge and Power: Postcolonial Studies, Decolonial Horizons Summer School, organized by the Center of Study and Investigation for Decolonial Dialogues in Barcelona, Catalonia, Spain. This is an intensive school organized by international faculty that attracts around 60-100 students from around the world each year, primarily doctoral and master students, young faculty, advanced undergraduates, and other professionals in related fields (particularly education and the arts). While attendees come from many different areas within the university and outside, and hail from all continents of the world, what we all share is a deep interest in processes and projects of decolonization (plurally construed). Because we shared the project of decoloniality, our interactions were an incredibly rich resource that allowed us to learn from and challenge one another in the spirit of solidarity. It is safe to say that there is no equivalent space of such strength, at least in the United States. The audience (picture by Nelson Maldonado-Torres).

The School consists of two or three intensive lectures a day, each lasting at least two hours. And between lectures was the time for general collective discussion, be it of the reading materials, the content of the lecture, or other concerns one may have. During spare time, people also organized into groups based on discipline or area of work/interest, and discussed in more detail how one’s area specifically relates to the decolonial project, or what kind of work one is doing to enact such relation. Days were very intense, as discussion tended to continue over lunch and dinner, and then lecturers unofficially held “office hours” in the buzzing Plaza del Sol in the neighborhood of Gracia. This was a great opportunity to interact with such thinkers on a one-on-one basis in a relaxed setting, as well as an ideal time to get to know one’s colleagues.

This year, Ramon Grosfoguel (UC Berkeley) opened the School with an introductory lecture in which he situated the historical context of the rise of coloniality as a pattern of power, going back well beyond the commonly held standard for such rise (the so-called “discovery” of the Americas in 1492) to the rise of Christendom in the Roman Empire during the 4th century of the Common Era. During the first week, our very own Nelson Maldonado-Torres gave a series of lectures titled “10 Theses on Coloniality and Decoloniality,” where he outlined the analytics of coloniality and illuminated on three interrelated spheres where decoloniality takes place: theory, arts, and activism. Linda Alcoff (CUNY) also gave a series of lectures, titled “Decolonizing Epistemology.” Alcoff highlighted the importance of epistemology and normativity for the project of decoloniality, as the modern/colonial horizon relies on these elements for its own justification. Moreover, Stephen Small (UC Berkeley) gave a lecture on “Black Europe,” focusing on the politics of race in Great Britain, and Dew Baboeram (IISR) held two sessions on “Decolonizing the Mind,” where he put forward a critique of critical sociological theories from the perspective of epistemic decolonization. The second week saw new lecturers with Enrique Dussel (UNAM) who presented a series of talks on many of the themes of the Philosophy of Liberation: a new vision of world (political) history, an ethical critique of capitalism following a groundbreaking reading of Karl Marx, an alternative vision of politics and political philosophy, and an analysis of the notions of interculturality and transmodernity for the near future. Ruthie Gilmore (CUNY) too held a series of seminars, focusing on the recently deceased Cedric Robinson’s Black Marxism. Gilmore brought to the school a refreshed radical politics that is as relevant as ever, given the contemporary status of racial politics and their material ramifications in the United States, as well as the constant rise of neoliberalism in all corners of the world. Sabelo Ndlovu (UNISA) closed the School’s schedule with two lectures on “African Decolonial Thought,” in which he mainly looked at the pitfalls of postcolonialism as a lens through which to understand the reality of the continent of Africa. While all sessions were beneficial to my intellectual interests, I am very satisfied to have discussed the work of Enrique Dussel with other voracious readers (and critics) of him, as well as to have had the privilege to have many one-on-one conversations with Dussel himself. These discussions were a continuation of an exchange started here at Rutgers University when he visited the Latino Caribbean Studies Department in April of 2015, that then continued at a philosophy conference at Villanova University in April of 2016. These have re-energized me to continue doing the work that I am doing, as well as given me many lines of thought to explore this year and beyond as I prepare to put together my doctoral dissertation. Yet, besides holding these theoretical concerns, in Barcelona I also managed to connect with local activists who are in one way or another realizing, on the ground, some of the aspects of the discourse and practice of decoloniality at many levels: Barcelona, Catalonia, Spain, Europe. They are anti-gentrification activists, activists in defense of migrant rights or minorities within Europe (such as the Romani people), as well as those interested in the independence of Catalonia from Spain. Of particular importance to my own developing interests in discourses of citizenship, migration, racialization, and coloniality, was meeting some of the actors involved with the Espacio del Immigrante, a health/socio-cultural center in an occupied flat in the rapidly-gentrifying neighborhood of El Raval. This is a center that for approximately two years has been providing free healthcare to undocumented migrants to counteract the actions of the Spanish government that has made it illegal for undocumented migrants to receive basic care at public hospitals (language classes and seminars on critical thought are also held among other events). While I was in Barcelona the local police force had orders to evict those inside the Espacio (an extension of 45 days was granted at the time of this writing). This event made me grasp the complicated socio-political atmosphere currently in Barcelona, beneath the city’s public appearance as the most progressive city in Europe open to refugees. Put simply, these interactions with local activists were as important and thought-provoking as were the series of lectures I attended at the School. They were another decolonial dialogue, not unrelated to those I had at the Summer School.

Overall, the Decolonizing Knowledge and Power: Postcolonial Studies, Decolonial Horizons Summer School is a crucial space in the development of the decolonial project. The project is a plural endeavor, not without its internal critiques, that seeks to challenge the abundant colonial legacies across all levels of experience in our shared world. I am grateful to both the Program in Comparative Literature and the Graduate School at Rutgers University that supported my trip. I definitely encourage anyone interested in processes and projects of decolonization to attend this School. The best time to apply is during the fall semester, as it increases one’s chances of receiving travel support from the university and/or external sources. The deadline for applications is usually early in the following year. For more information, this is the School’s website.