In the June of 2018, I interviewed Juan Cid over the course of a few weeks, a leader in the LGBTQ movement in the capital of the Dominican Republic, who was at the time preparing for a number of talleres (workshops) and LGBTQ events in celebration of gay pride. Meeting in La Zona Colonial at a typical Dominican restaurant, La Meson de Bari, we spoke about the past and future of the queer organization in the island. One of the central questions that motivated my interest in Cid’s work was to figure out how the city has developed alternative spaces and institutions to support LGBTQ people. I had learned through an internet search that Cid was the person to speak to about LGBT activism in the capital, and when I visited in June and listened to all his prospective activist projects over the next few weeks—it was one of the most striking facts to learn that his activism was pro bon.  Indeed, Juan’s official work is as an editor and producer, and his support for the LGBTQ community through IURA , his organization, is supplementary. He has worked with the well-known and critically acclaimed performance artist, novelist, musician, in short, the all around do-it-yourself artist that is Rita Indiana as well as working in editing “sensaciones virales” (viral sensations) like “Salón Belkys.” In his career, he has captured a number of awards and been featured in international cinematic festivals in Amsterdam, Cuba and others. 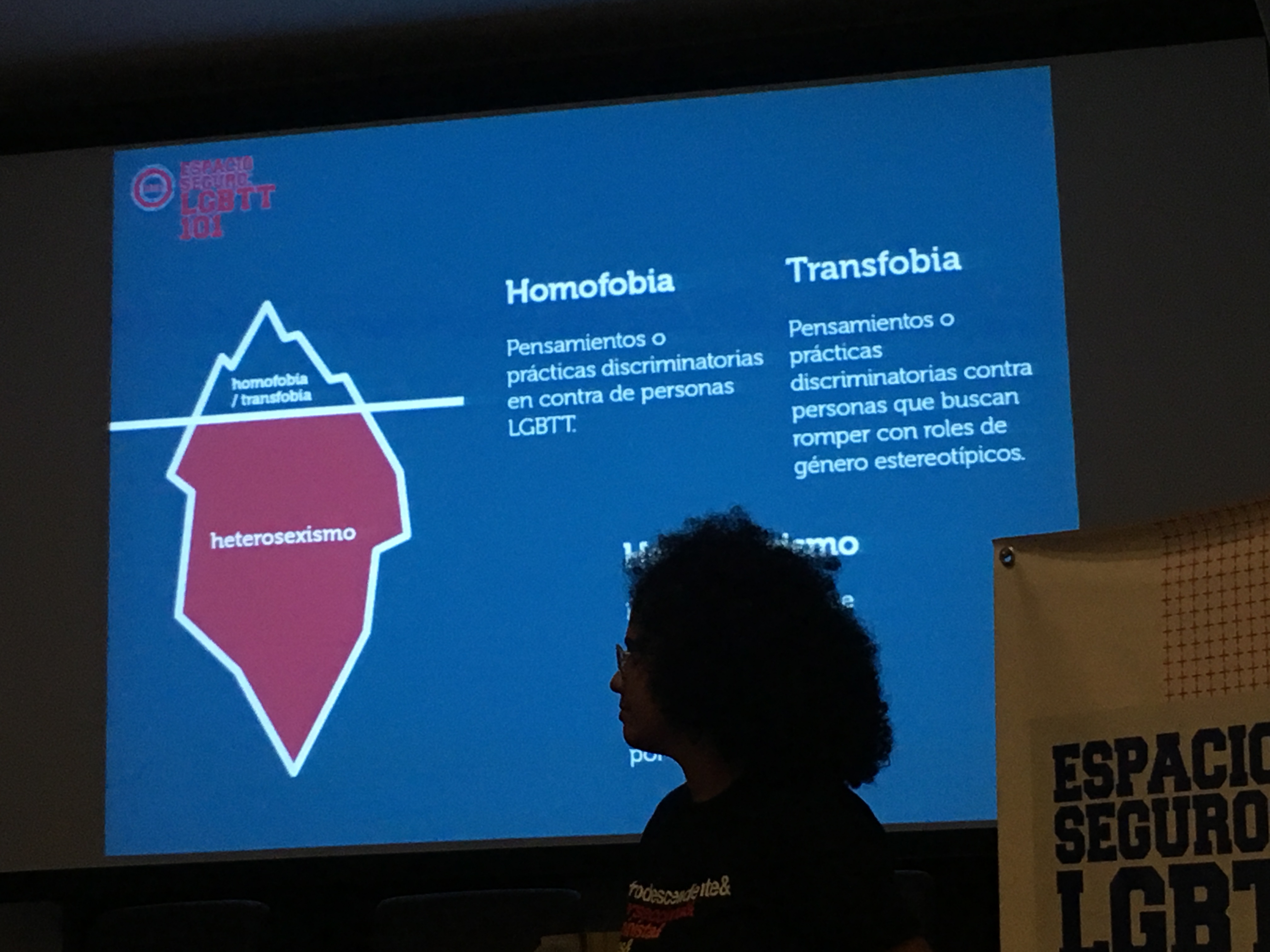 The 1970/80s, according to Juan, were distinguished by an increased cultural freedom and the existence of a number of gay nightclubs within the city, including Aire, that no longer exist. But what predominated were a number of exclusive clubs serving a more elite gay community. Santo Domingo continues to have a number of gay night spaces today, many of which are frequented by people across class and racial differences, and situated in the most tourist area in La Zona Colonial, but Cid suggests that many alternative night time social spaces have closed over the years. Contemporaneously, however, the city has found a strange ally in the US, at once supportive of today’s struggles for the human rights values of LGBTQ people and yet the most neo-imperial force in the history of the Caribbean in 20th century, including in the Dominican Republic, where it has effectively curtailed and undermined the democratic processes within the island through numerous occupations. US organizations provide some monetary aid and the US has had an openly gay, Wally Webster, championing gay rights and visibility in the island.  Despite aid and the support of US political figures, Cid reports a lack of social and health data that would help serve the LGBTQ community, including hard to get numbers about the number of suicide rates affecting the community. At a meeting for LGBTQ allies held at El Centro Cultural de España in Santo Domingo in June 14th, Cid addressed this and the most pressing concern of the movement at the moment: a bill that would prevent discrimination against people because of their sexual orientation and sexual/ gendered difference. The taller was at once a pedagogical service aimed at teaching the broader public a more inclusive language about sexual and gender variance but also a tool for allowing members both within and outside the community to communicate in a shared space to address the common struggles around sexual/ gender difference. It was instructive to listen to young Dominicans united in a community center to better understand the evolving issues and variance in language and experiences of the LGBTQ coalition since it represented the ties that do exist within and outside the community as well as the exceptional strides in activism that the city continues to make through efforts made by people like Juan. Spaces like this remain crucially important as networks that do outreach and produce change through dialogue.  Beyond this type of community engagement Juan hopes that the future of the LGBTQ community in the city would allow for the creation of more “safe spaces” for LGBTQ youth and social programs as well as a shelter to serve homeless LGBTQ people. 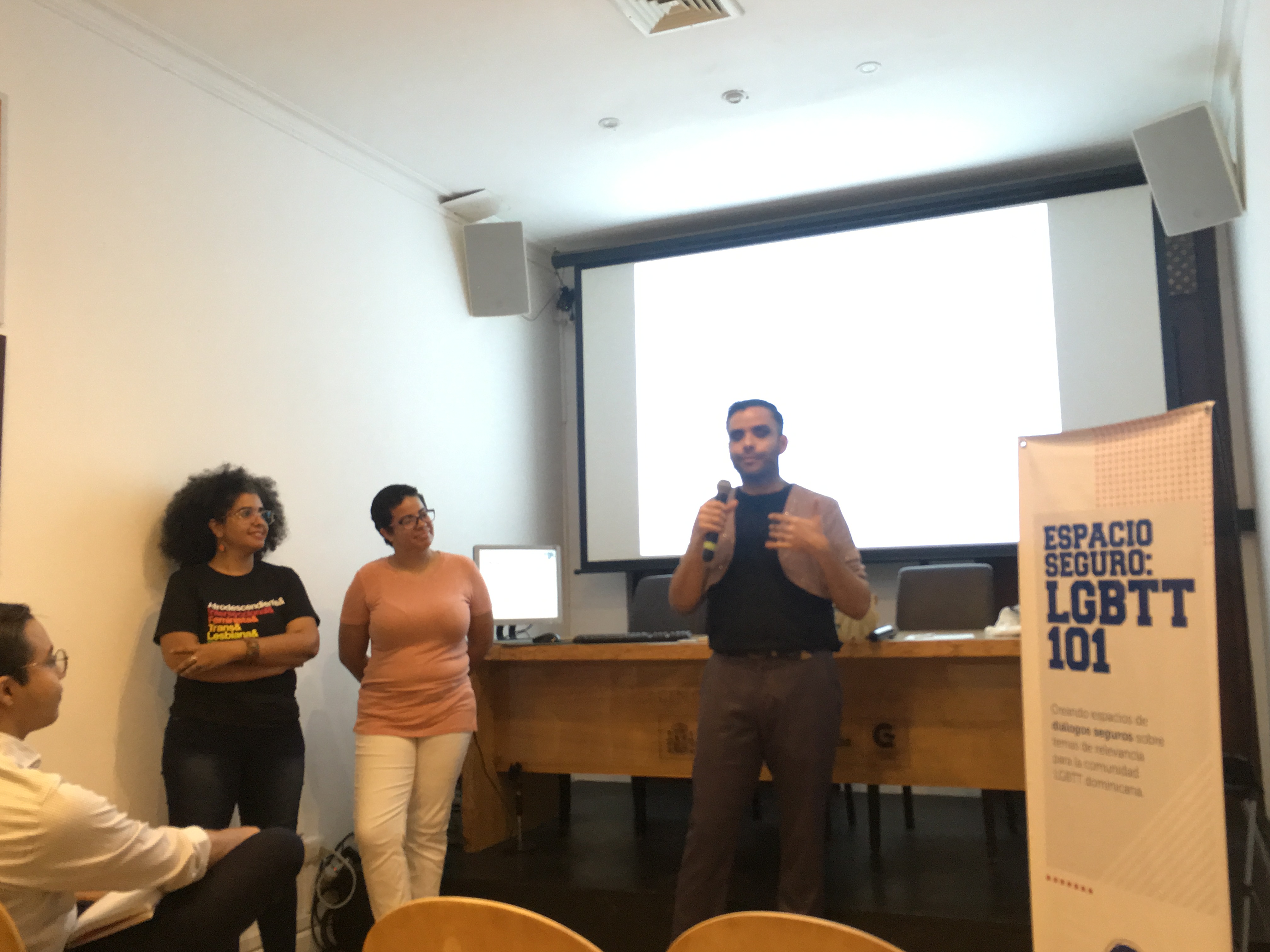 The focus on what was there and what was no longer there in terms of recognizably queer or gay spaces (and cultural centers like el Centro Cultural de España that enable conversation) also intersected with a larger question I posed about the different political and memorial markers that exist throughout the city. On the one hand, Santo Domingo memorializes one of its longest running, and for some one of the most corrupt symbols of the continuation of el Trujillato (a period of political despotism headed by dictator Rafael Trujillo (1930-1961), presidential figures whose policies led to the migration of waves of economically- deprived Dominicans and the shifting of the economy toward tourist industries in the 70s. On the other, the city remembers and similarly has erected monuments and named streets and important geographical markers to the memory of Juan Bosch, whose short government in 1963 was defeated by a US-led invasion and military coup, which eventually resulted in Balaguer’s return to power for much of the late 21st century. 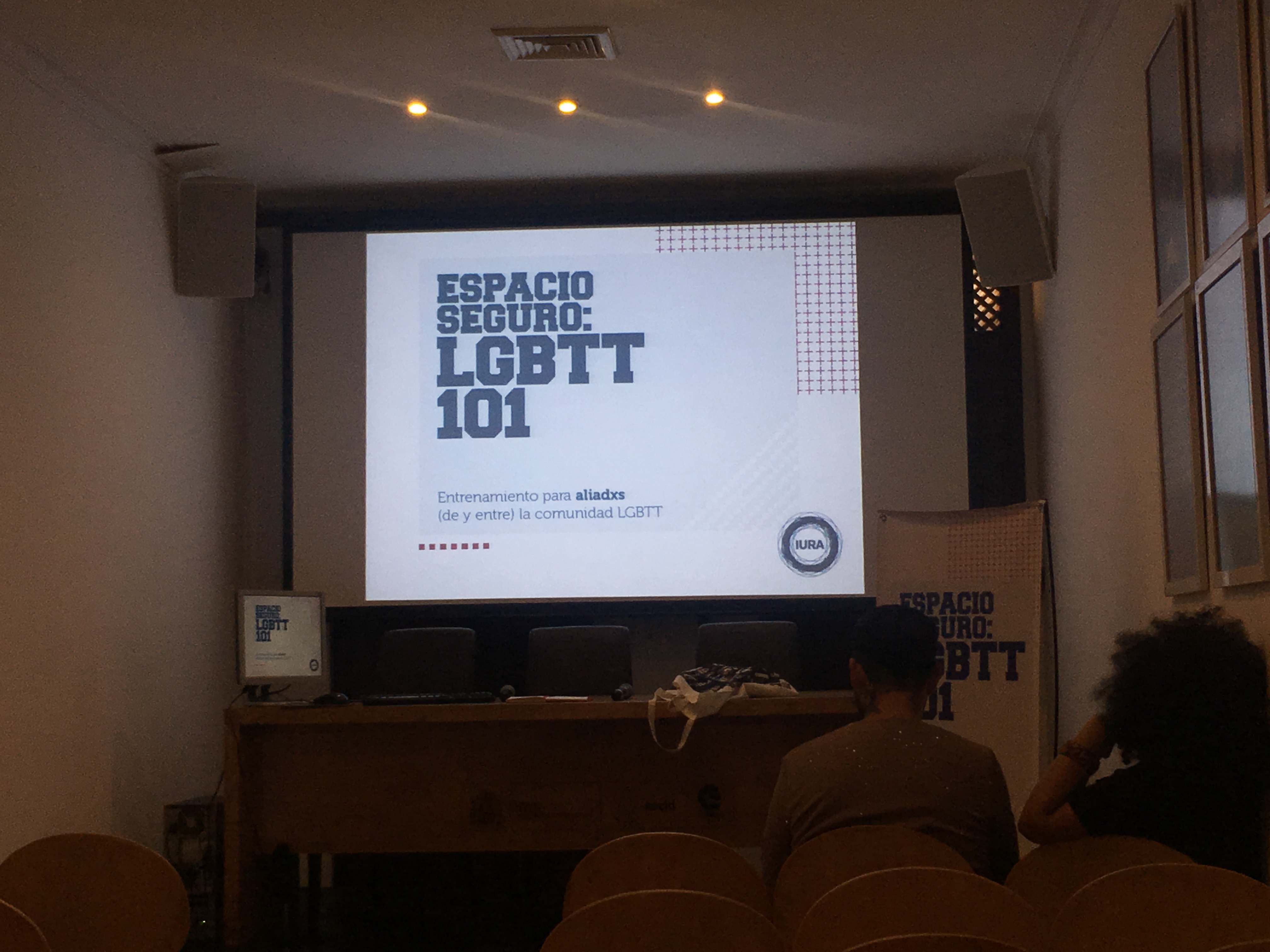 I want to close with reflections on the critical thought of a queer Dominican artist, the novelist, Rita Indiana. In May 31, 2018, she gave the keynote address in el Centro Leon in Santiago, Dominican Republic where she spoke on a piece with the wonderful title, “Skaters and Drag Queens: Dominican Cultural Ecology ‘Do-It-Yourself’” (Skater y Drag Queens: Ecología Cultural Dominicana). Indiana begins with an anecdote about her childhood: receiving a gift sent to her apartment in Santo Domingo from her deceased father in the diaspora who was assassinated in the Bronx. The gift—a Walkman with a Guns and Roses cassette— arrives late, after the father’s death, as if from the beyond or, more logically, a sign that “el correo dominicano era una mierda.” The lecture centers, however, on Indiana’s experience in the evolving countercultural spaces that sprang up out of nowhere, impromptu, spontaneously, and organically in  Santo Domingo vastly developing through the labor of Haitian hands and under the “las caducas ideas del progreso” (the expired notions of progress) of president Balaguer. Indiana lyrically describes the space of the developing city as one of constant “excavacion y construccion” mirroring “el cover de una banda de metal , una series de avenidas hostiles que conduction al centro de su universo: el skateboard shop”  There, and in an abandoned commercial center turned into a skate boarding ring “desadaptados” (non-conformists) like Indiana would converge ; these were punks, skateboarders, hippies, and fans of metal, all part of different subcultures who were colonizing empty spaces, coalescing in them in order to produce an alternative cartography to that of the traditional city. Consuming pirated videos of skateboarding and horror shows, the commercial center also became a site for selling t-shirts, getting tattoos and hanging out. This space, whose owner no one knew, was transformed into a communal cultural center through the ingenuity of its adolescent members. Likewise, the skateboarders transformed the concrete of the city’s patrimonial monument El Plaza de la Banderas, a symbol of patriarchal power and veneration of the state, at the intersection of Churchill and John F. Kennedy into an impromptu skating ring, transforming the city of Santo Domingo into an alternative urbanscape with new possibilities, that is until the police eventually showed up. The nights, Rita Indiana, navigated the gay scene of disco free, “una version caribena de la Ariel de la Tempestad de Shakespeare” a space where the body and gender not the street was being undone (desdoblada) and remade by its performers. For both skateboarders and drag queens, Rita asserts, the body and its transformation is the main protagonist. In the face of a lack of social and cultural support, institutional access, both drag queens and skateboarders learn to make do by claiming and restructuring what’s already there. This I came to see firsthand when I visited a bar in a residential neighborhood in Gazcue, near the old colonial section of the city, where a home was transformed at night into a club for mostly gay patrons. When the night was over, and as we were leaving, the club was slowly becoming again someone’s home. Whoever the owner was had turned this home into a social space if only for a few hours, making do and repurposing what exists to make something spectacularly queer in the heart of Santo Domingo. 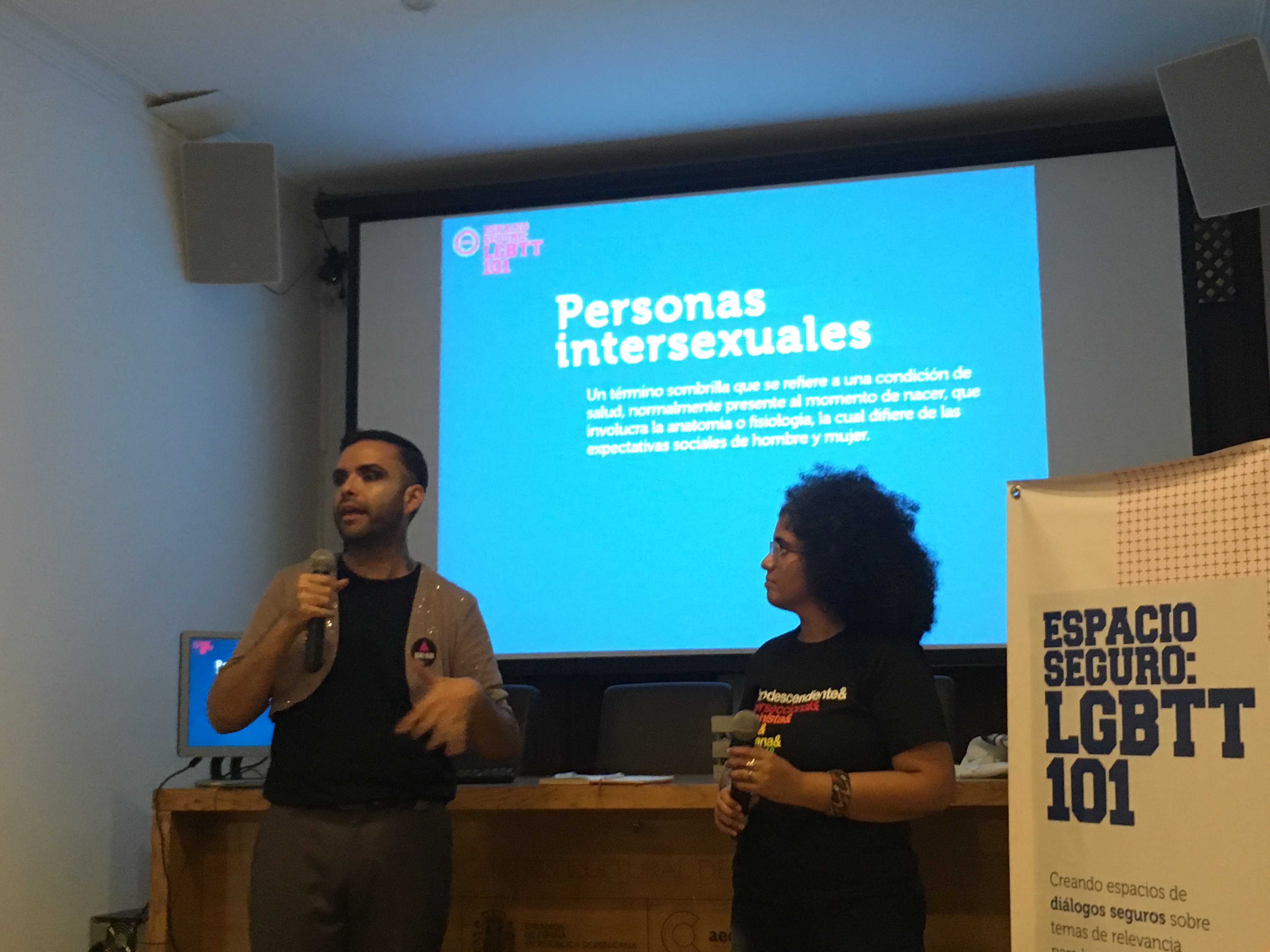