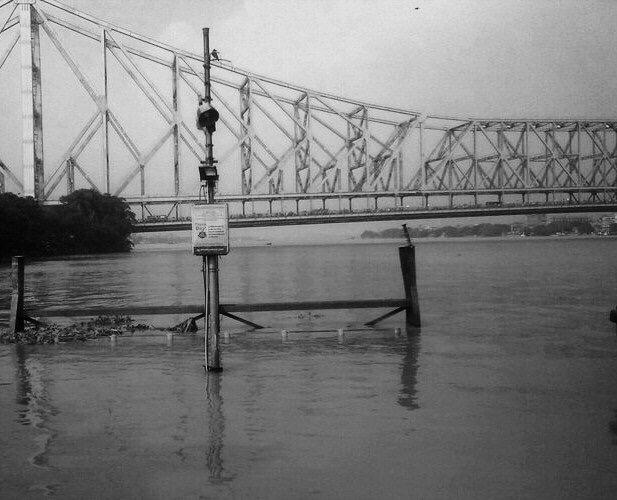 The Inter-Asia Cultural Studies Summer School this year, set in Kolkata (previously called Calcutta), was titled “Calcutta: City/Contemporaneity.” I returned to my hometown in June to attend this summer school, incidentally hosted by my alma mater, Jadavpur University. Aside from being my hometown and one of the foci of my own research, Calcutta/Kolkata is also one of the most important urban centers in South Asia, and particularly India. As the erstwhile capital of undivided British India, the city had been at the heart of some of the core debates surrounding colonialism, nationalism, partition, refugeehood, and has consequently also been central to articulations of the same through literature, theatre, and cinema. Even in the decades after the nation’s violent shift to postcoloniality, the city has continued to occupy a unique space in the national sociopolitical and cultural imagination. 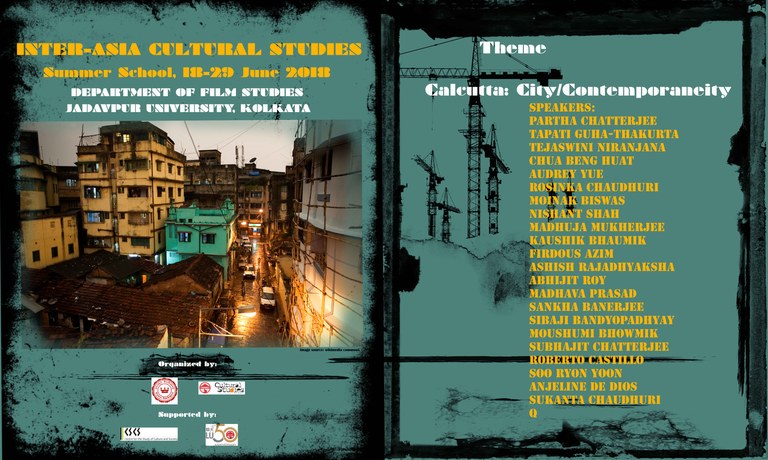 The multidisciplinary summer school focused on contemporary debates informing Calcutta’s intellectual traditions as much as it took note of the physical spaces of their action and their lived reality: streets, coffee houses, bazaars, universities. The summer school format included lectures by notable scholars in the morning, and a seminar style discussion featuring the summer school participants and the scholars where the lecture as well as pre-circulated readings were discussed. The evenings were dedicated to film screenings, live performances, round table discussions, or walks through diverse neighborhoods of the city to get a sense of the urban landscape. The modules of the intensive summer school were ‘The City and the Urban Landscape’, ‘Calcutta/Cinema/City’, ‘City Histories: Deposed Kings, Mobile Labour’, ‘(In)visible Publics’, ‘City and Literature: Printed Worlds’, ‘City and Literature: Voices of the Outsiders’, and ‘The Question of Urbanity.’ 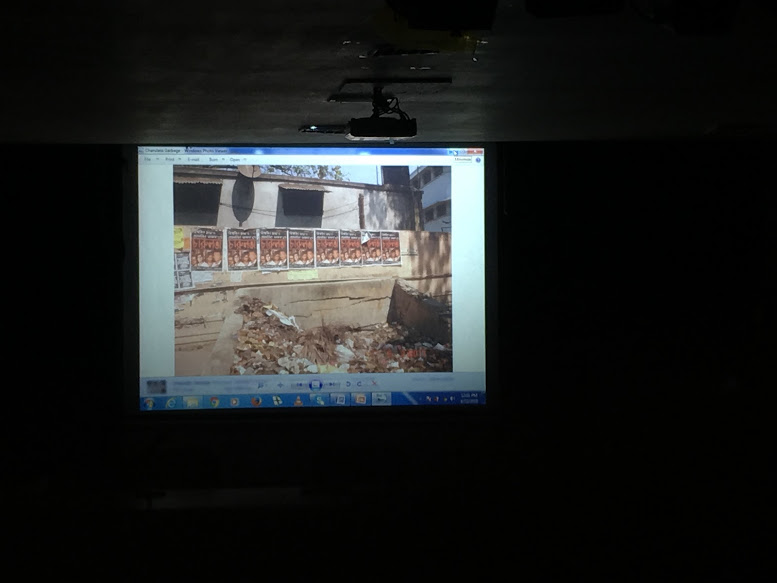 Trash in the city

My own favorite module was that on ‘Calcutta/Cinema/City’, featuring lectures by scholars I deeply admire: Kaushik Bhaumik, Moinak Biswas, Subhajit Chatterjee, Madhuja Mukherjee, and M. Madhava Prasad. One of the fascinating aspects of Calcutta and its representations in cinema that have emerged in recent years recognize much of the city through absences of lost times and places. This nostalgic recognition of change in the city is made visible by use of certain set tropes that are becoming increasingly symptomatic of this genre of films: the locations are mostly the same older colonial parts of the city, the buildings are Victorian mansions from these parts of the city, and they emphasize a certain kind of antique object-oriented art design within the interior of said mansions, etc. If these reel tropes evoke and re-manifest certain memories of a particular time in Calcutta, they also ruthlessly erase the present-day lived reality of Kolkata that exists beyond this cinematically codified Calcutta. The conversations about the city and cinema in the summer school surrounding the city’s vexed relationship with space, time, and history were really relevant to my own work. 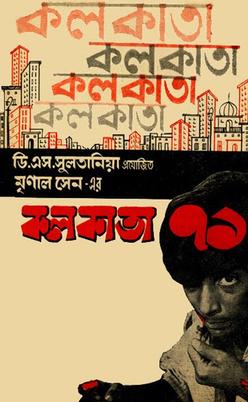 It is the city’s strange inability to be located in a singular place and time at any given time that resonated through the lectures framing the summer school, which opened with a lecture titled ‘When is Calcutta?’ by Partha Chatterjee and closed with one titled ‘Where is Kolkata?’ by Sukanta Chaudhuri. Both lectures made way for more questions than answers perhaps, but certainly opened newer avenues for the research of all those who attended them. 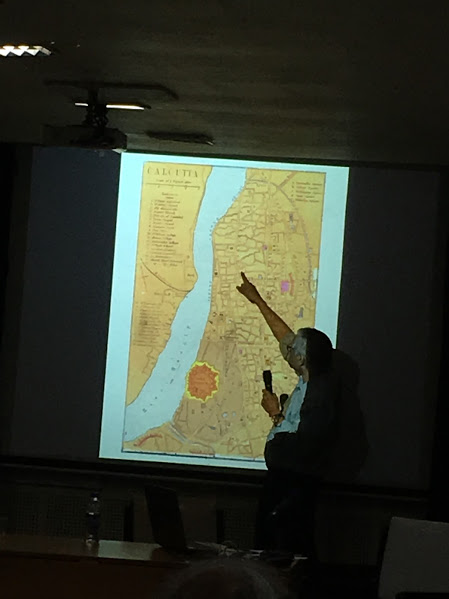 Sukanta Chaudhuri lecturing on ‘Where is Kolkata?’

Aside from the enriching learning experience that were the lectures and seminars, perhaps what I appreciated most are the spaces the summer school created for informal discussions between participants and scholars, during which I got a chance to discuss my own work as well as theirs. I suppose it is unsurprising that this should be the case in a city like Kolkata, a city characterized by adda, endless conversations over tea or coffee that effortlessly goes from one subject to another, traveling through history and around the world without moving in time or space. 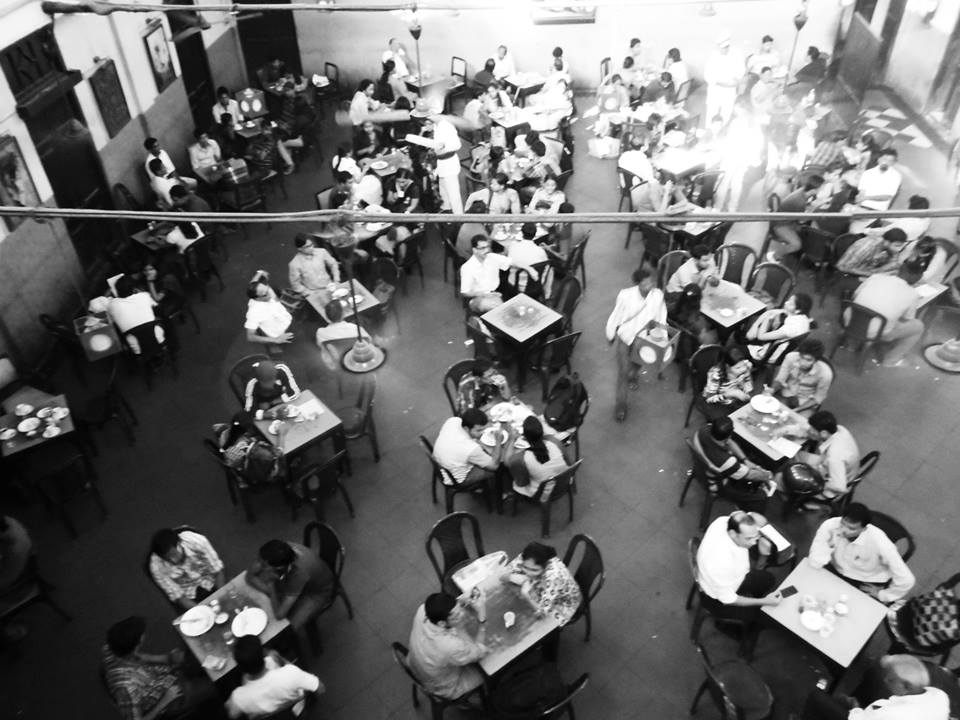 I am thankful to the Rutgers Program in Comparative Literature as well as the Cinema Studies Program and the South Asian Studies Program for supporting my trip to Kolkata to attend the summer school.

One thought on “The Inter-Asia Cultural Studies Summer School”