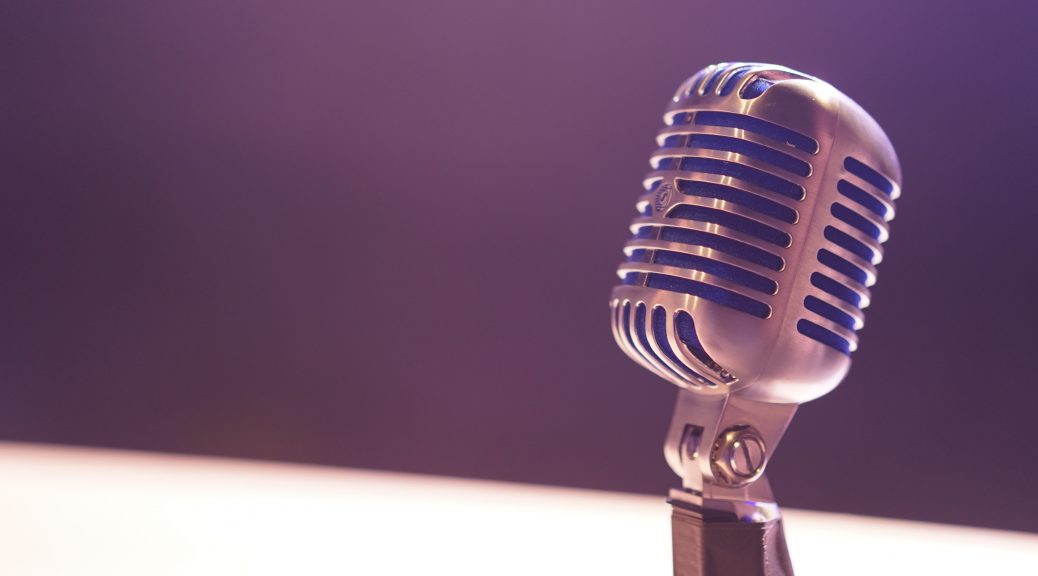 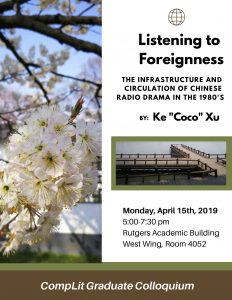 How is the perception of foreignness constructed through the broadcast of radio plays? Relatedly, how does radio—as a medium of mass cultural communication and an artifact with a particular material and institutional history—affect the production and reception of these radio plays in 1980s China? These were the two main concerns animating Coco Xu’s April 15th colloquium on the history and politics of what she calls “radio plays”: literary radio broadcasts that include translated world radio dramas, adaptations of 19th-century European novels, and edited, dubbed film recordings.

Following Naoki Sakai’s theory of “heterolingual address”, Xu argues that translation as intersubjective communication is key to both comprehending foreign literature and developing a cultural imagination of unknown “others”. According to Xu, sound “allow[s] listeners to be at once removed from the world of imagination and transported into [a] fictional land”, where they can “live out an indirect experience in another time and another life”. Radio plays are thus an excellent subject for an investigation of translation and cultural imagination. 1980s China, where radio plays juxtapose “19th century Europe […] with 1940s’ America, and a story from contemporary West Germany is followed by another that’s set in a futuristic China”—but all characters somehow speak perfect Mandarin Chinese—is a particularly messy, candid, and thus generative moment to explore.

Xu began her talk with a concise history of the development of the genre and medium in China, where radio was introduced alongside cinema in the early 20th century. Early recordings—postdating decades of unrecorded live transmissions—were largely obliterated in the Cultural Revolution, which did away with 90% of foreign music recordings. Post-revolutionary reform policies called for a new supply of programming to fill in the void; accordingly, by the 1980s over 70 regional and local radio stations were producing 600-700 radio dramas each year. The very first stereo radio drama was an adaptation of Alexander Pushkin’s 1833 fairy tale “The Tale of the Fisherman and the Fish”, broadcast by Guangdong Radio in 1981. How did such adaptations of European literature form a cultural imagination of the west, and how might this have served as a strategic tool in the ideological debates of the early 1980s?

To answer this question, Xu offered an illustrative close reading of Vanina Vanini, a popular early-80s radio drama adapted from Stendhal’s 1829 novella of the same title. Both the novella and the adaptation tell the story of the fraught relationship between the titular protagonist and her lover Missirilli, a carbonaro in a nationalist plot to liberate Italy from Austrian overlords. However, where Stendhal paints a nuanced picture of Vanina’s inner struggles, the radio drama portrays her obsession with Missirilli as springing from “pure love”, rendering her and her allies vulgar and cartoonish.  Indeed, Stendhal’s scheming, self-serving Vanina becomes simple-minded and naïve in the adaptation: where

as the former finally accepts her rejection, returns to Rome and moves on, the latter ends pathetically attending to a furious Missirilli, who excoriates her—in the drama’s very last line—as “cursable Vanina Vanini!” Xu notes that while Stendhal’s sympathies quite obviously lie with Missirilli, whose role in turning Vanina into a desperate “monster” he conveniently overlooks, the 1980s adaptation takes this patriarchal perspective even further: the ending in particular “highlights how woman—especially woman corrupted by the most dangerous sentiment of people of the social, cultural and especially class that Vanina stands for—is the hindrance of the righteous cause and the root cause for Missirilli’s failed revolutionary ambitions”.

This first taste of Xu’s project, which “explores the translation of foreignness through a close reading of radio plays that portray exotic places and foreign cultures”, builds upon the theoretical basis she developed in her work on translation as loving imagination, presented at “Love in Translation”, the Rutgers Comparative Literature graduate conference of Spring 2018. Her completed study aims to fill a gap in both radio studies and contemporary Chinese literary studies, but (as demonstrated by an enthusiastic Q&A session) her work will undoubtedly also be of interest to comparatists and cultural studies scholars working in many traditions. Thank you and congratulations, Coco!