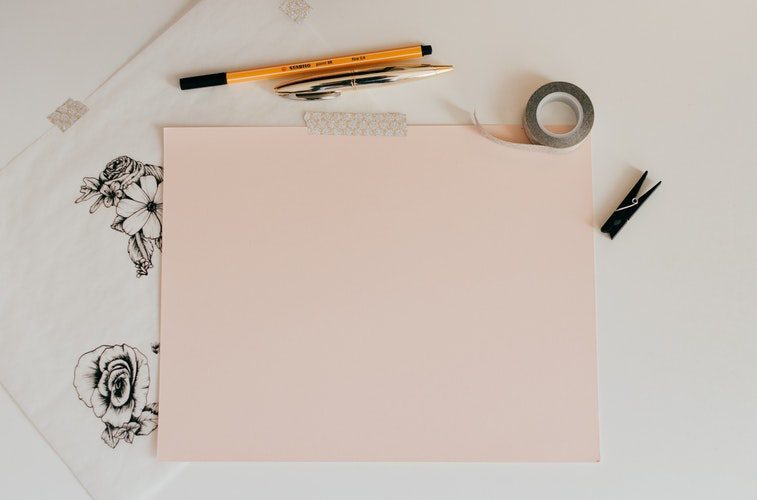 During the  “Love in Translation” conference, the organizers received a lot of feedback on the wonderful poster design. So the conference co-chairs and blog editors, Rudrani Gangopadhyay and Penny Yeung decided to interview the artist behind the poster, Danel Roldan.

Editors: What was the process of coming up with this like? How long did it take you to kind of do it from start to finish would you say?

Danel: I was actually working on those over the winter break in DR. I was initially going with a really modern style. [Maria] Elizabeth hated it because it was mainly looking like a parody of the ‘I Love New York’ stuff. I was thinking of a juxtaposition of what love is. It encompasses every emotion … so I started thinking of love in translation and I was thinking of what is that because love is translated by everyone individually into so many things. As you are growing in relationships, love brings out different facets. What does it mean to put that onto literature or any creative process? Once I arrived onto the [image of the] ink and the pen as the instrument of translation, I sort of got it all. 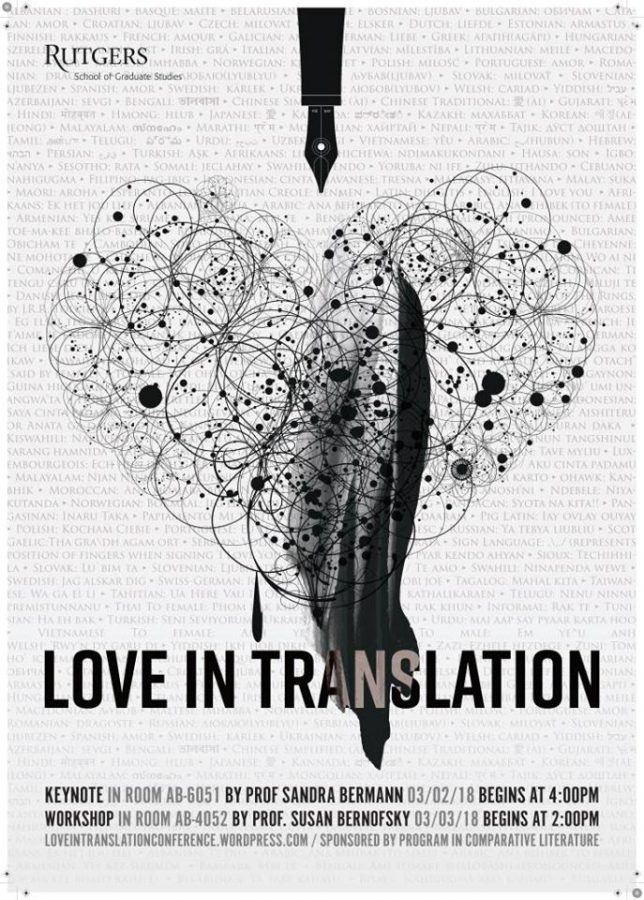 Someone once asked me what I like about the process, and I said I hate the process. You spend half the time belittling yourself, then you arrive at that one moment of I’m a genius. You hate the process and then you love the process. I came to the ink and the pen, then the heart. That was main thing. And all the circles, which is like  doodling, like somebody trying to come up with something. That’s what any creative process is like, till you see the semblance of something. The poster is trying to translate that process – there’s this pen dripping ink, and then there’s a heart, but also there’s a scar in the heart. Creation is passion, and any time you are trying to create something, you’re going to suffer for that. That’s what I tried to put in the poster. It is the juxtaposition of love and passion and suffering, because you are suffering to create, suffering for what you’re passionate about.

Then there was the 100 languages in which the word love and the phrase ‘I love you’ shows up. Part of me did not want to put in the languages within brackets, but I did so people would know what language it is?

Editors: We were also wondering about some of the other ideas that you considered before you arrived at this one.

Danel: Something that I was thinking about was the work of Jackson Pollock. Basically a lot of ink splatters, but a resemblance of something, like it is a little translated. That idea that you start off with a sketch but there’s a slow morphing. When I draw something I have no clue how,  I just start to doodle. So the Jackson Pollock thing was about trying to capture the translation mid-process. These splatters could have also been link symbols of love.

Another idea I had was that of a rose, but in a type collage. The 100 languages in different tones of red, but when I started doing it it was taking way too long. It looked so great but it would take weeks.

Editors: You talked about hating the process, or having this love-hate relationship with it but now that you are done, would you be able to retrace the process of this final design.

Danel: First I tried it with actual ink. I was fighting with the practical side and then the artistic side. Again, it was just the time thing, and I can’t do it, so it was just then digitizing it, but also going towards like ideas, like sketchbook, just going with the pencil and just trying to translate a heart in different ways. So first I tried the whole heart was in ink, was mainly like a shadow of ink … it was getting forth that idea of sketching things out. I was trying to bridge the idea of accidental creativity and actual purposeful creativity so if I had use the ink splatter heart it would have been more like “oh, serendipity!  like oh, it just happened,” as opposed to you like admitting I’m toiling, I’m part of this, I’m trying to do this. I was trying to doodle with pen and paper, pencil and paper that way.

Another idea was that of an inkwell that tipped over and made a spill that looks like a heart which was what I was going to do if we did tote bags or bookmarks. If there was another part of the campaign it would have resembled that.

Editors: You do a fantastic job of translating the ideas we had on paper. Was there anything different in creating this poster design for a bunch of academics than the work you have done before? Big differences in designing for different target audiences?

Danel: So I forget the details of other poster which I had made for some professors. It was about slavery and in the civil rights movement. The slaves were free, but they were still enslaved because mentally they were like, what is freedom? We fought so hard for it yet we don’t know what it is; what would you do with freedom? You’re free but you still depend on this kind of thing you know? And some slaves thought that I am here by choice and I could always leave. I interpreted it as slavery of the brain, and the professors didn’t really like the idea. The word itself was made out of “IBM,” and it is sort of like a pictogram, a translation of a word, so that’s what I did, and they were like I don’t think people would get it. Well, they would if they read into things and translated them. If you won’t, then it’s not for you. This is not for a casual audience, you’re going to have to work with this thing, which I thought an academic audience would.

The professor wanted something more literal. After a few months,  I was like, aw man, why didn’t I see it? It was just as simple as putting in a bird cage: just the outline of a bird cage, a bird on the inside, and the birdcage actually open, which brings forth the message, with the word at the bottom. The bird is free but not, because of the bird cage. It’s different [to work with academics] because if you’re an educational institution, then I would imagine your whole purpose is to challenge people’s minds with the material and in your marketing you sometimes don’t. To me, if an educational institution is not doing that it is a little strange.

Editors: So you’re saying in this case, your art didn’t quite translate the way you thought it would.

Danel: The projects are like my kids and my kids can go anywhere. It’s like what you instill in your students  speak to what kind of teacher are you. This is a challenge definitely … but that’s the system of education. I’ve also worked on some book covers for Pearson, and it was along the lines like that. It wasn’t subtle covers: it was about civil rights movement and it was a very political “poster-y” poster. It was three books, one on the government, one on signs, one on a different subject  and they all had to be unified so I was like this is cool. So when I pitched the idea, I was thinking it would be a phenomenal idea, it’s going to allude to the subject matter and be symbolic. The guy that I worked with said this is phenomenal, but then there were different editors, and one was like “what is this? No, no, it’s too artsy, too symbolic.” Again, it’s the same argument … but you’re an educational institute, and students will go where they go.

Editors: Anything else you would like to say to the readers of the Comp Lit blog?

Danel: I hope that people dig the poster and Love in Translation is a success.

The Love in Translation  conference organizers would  like to thank Danel Roldan for his wonderful poster design and Maria Elizabeth Rodriguez Beltran for assisting in the creative direction. 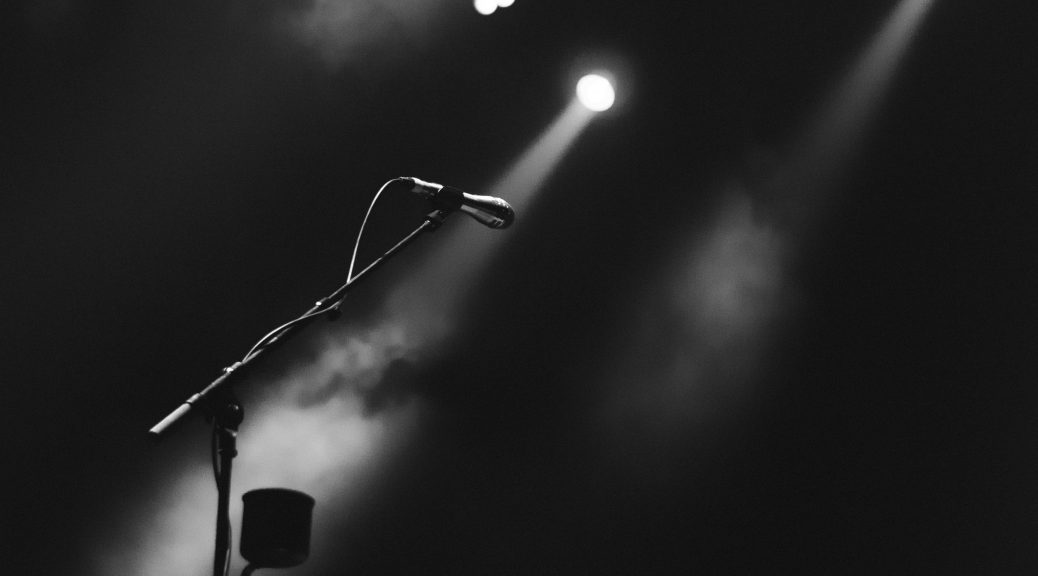