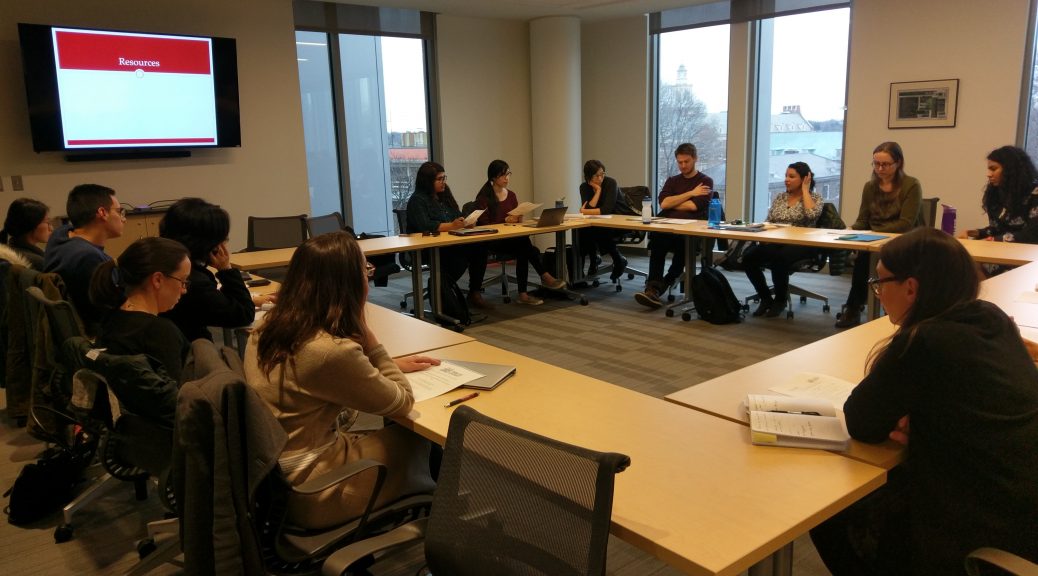 On Thursday, March 30th, students and faculty from Comparative Literature gathered to attend a workshop, organized by Tara Coleman and Carolyn Ureña and titled “Becoming Connected Academics: Career Diversity and Comparative Literature.” Both Carolyn and Tara have recently defended their dissertations, and have been fellows of the MLA Connected Academics Proseminar, an initiative that this blog has been covering since its inception.

The purpose of the workshop was to discuss with students and faculty the valuable work that the Proseminar has done in the last two years of introducing Ph.D. students to various career paths after graduation. The first misconception that was addressed during the workshop is the negative connotation often attached to the label “Alt-Ac” (Alternative Academic), which some still perceive as the alternative (read, second) choice, unwillingly accepted by those who fail to land an (increasingly chimeric) tenure-track job. Tara and Carolyn stressed instead that students should think of other paths as leading to equally legitimate and potentially satisfying careers. Most importantly, they explained how the Connected Academics Proseminar has offered them instruments to reframe their academic and non-academic experience so as to be competitive in a wider job market, highlighting that the skills we usually associate only with a job involving teaching and research can be valuable assets also outside academia.

The workshop stimulated a lively conversation among its attendees. It was noticeable that Jerome Kukor (Dean of the Graduate School-New Brunswick) and Dorothy Hodgson (Senior Associate Dean for Academic Affairs) decided to participate. Their brief interventions emphasized the importance of an organic interaction between Rutgers administration and the graduate student body for the promotion of career diversity. More than anything else, support from the different Departments and the Graduate School is of vital importance to the success of graduate students, regardless of what career path they end up choosing.

During the workshop, effective ways of exploring jobs and entering the “alt-ac” conversation (as early as possible!) were discussed. Carolyn and Tara presented with great clarity and enthusiasm the objectives and structure of the Proseminar, offering students extremely valuable instruments to start exploring on their own, as well as practical suggestions. Among them: attending panels and networking events organized by the Proseminar each year at the MLA Convention; understanding the importance of social media (particularly LinkedIn and Twitter) in building an eclectic and appealing profile; reading job ads to assess what skills we might already have and which ones we would need to work on.

In this regard, Tara and Carolyn pointed out that each field a graduate student might be interested in (NGOs, publishing, not-for-profit agencies, foundations, administrative roles within academia, etc.) has different requirements and expectations; once again, getting acquainted to them early on is crucial. Realistically, this might require extra-work during our graduate years (volunteering, internships, collaborations etc.) but the payoff–being able to choose a career depending on one’s affective, economic, and intellectual needs–will be surely worth the effort.