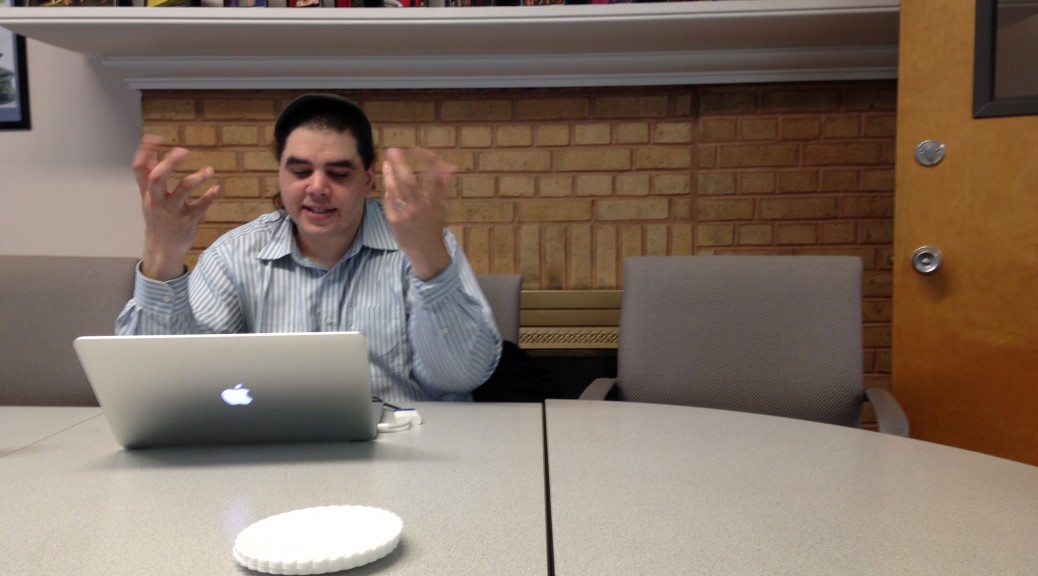 On Wednesday October 14, Ryan Kernan, Assistant Professor of English and Affiliate Faculty in Comparative Literature, presented his research at a Brown Bag lunch. Professor Kernan approached the recurring question of the relationship between Langston Hughes and Nicolás Guillén through the figure of Cuban writer, translator, and political activist José Antonio Fernández de Castro. By focusing on Fernández de Castro, Kernan argued for a comparative reading that does not fetishize difference by promoting untranslatability but rather uses intertextuality to read the political resonances of translated texts. 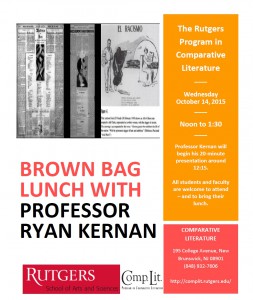 The presentation began with a reading of a political cartoon that established the terms of racial debate in Cuba in the period before Hughes’ Spanish translations. Then, Kernan focused on Fernández de Castro’s pseudonymous translation of Hughes’ “Brass Spittoons.” Kernan close read the poem in English and Spanish translation in order to identify the places where Fernández de Castro deliberately chose words that diverged from Hughes’ version in order to recast the poem with an explicitly proletariat political orientation. By considering the importance of Fernández de Castro’s work on this translation as well as his larger orchestration of the poetic relationship between Guillén and Hughes, Kernan’s comparative reading traces the way that black internationalism was formulated in a specific local context. Kernan argued that when critics claim that something is untranslatable or incomparable, this claim often reveals a lack of imagination. In contrast, his reading of the differences that emerge in Hughes’ Spanish translations offer fertile sites of comparative work on black internationalism.

Keep checking back for updated information about Comp Lit’s Fall 2015 events. All events will take place at 195 College Avenue unless otherwise indicated.

On May 8, 2015, Comp Lit faculty and students honored graduating B.A., M.A., and Ph.D. students. Recent graduates and their families  gathered to enjoy food and conversation at the end of the year celebration. Graduate Director Professor Andrew Parker and Acting Undergraduate Director Professor Ben Sifuentes-Jáuregui recognized the graduating students and wished them luck in their future endeavors. 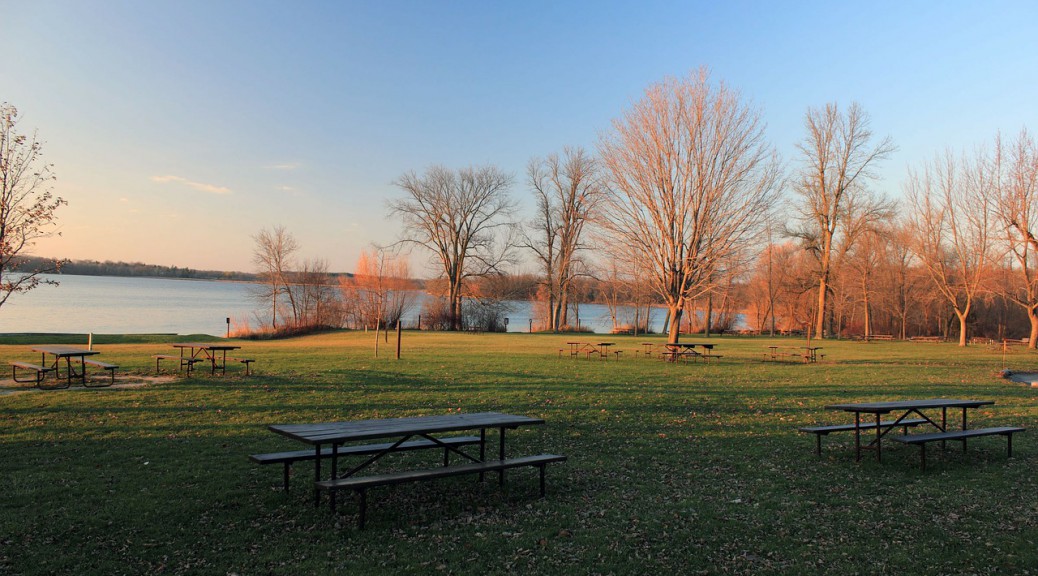 Comparative Literature’s Brown Bag Lunches highlight faculty research throughout the year. During a series of brief lunchtime meetings, faculty and students gather for presentations by faculty members about recent research projects. These presentations, along with graduate student potlucks, provide an opportunity for members of the Comp Lit community to gather together and learn about their colleagues’ research.  The 2014-2015 series featured: 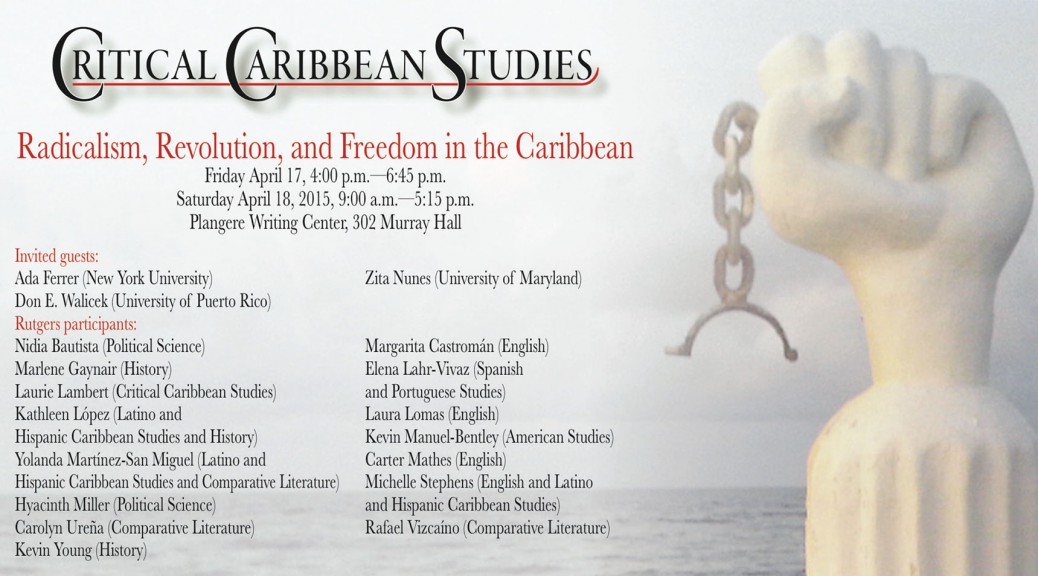 For two days in mid-April, Rutgers faculty, graduate students, and guest scholars of the Caribbean gathered together for the first annual Critical Caribbean Studies Symposium. The conference theme, “Radicalism, Revolution, and Freedom in the Caribbean,” inspired conversations around slavery, diasporic identity, transnational politics, radical historiography, creolization, language, ethics, and love in the Caribbean imaginary, served as a testament to the growing interest in and import of scholarship on the region at Rutgers and beyond.

Critical Caribbean Studies (CCS) began in 2011 as an initiative spearheaded by Professors Nelson Maldonado-Torres (LHCS & Comparative Literature) and Michelle Stephens (English & LHCS), who applied for a grant through the President’s Office to fund projects and events that promote scholarship on the Caribbean. The conference was organized by Professors Carter Mathes (English) and Yolanda Martínez-San Miguel (LHCS & Comparative Literature), both of whom emphasized the value of creating spaces for such conversations to take place. With this in mind, Mathes announced plans to expand CCS into an advanced institute through which larger scale projects, including a graduate certificate in Critical Caribbean Studies, would become possible. Audience members were very excited by this sneak peek and eagerly anticipate forthcoming news on this front. 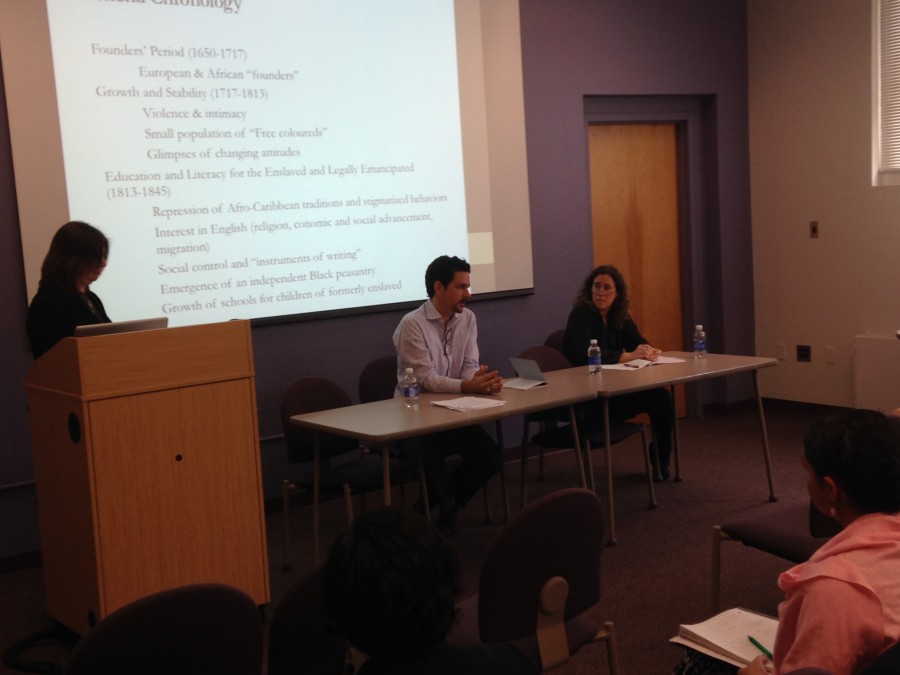 The symposium began with a brief screening of “Contra las Cuerdas” (Against the Ropes), a documentary film about race in Cuba—the first of its kind— and a Q&A session with Cuban filmmaker Amílcar O. Cárdenas. The first day also included a graduate student panel on reimagining Caribbean Studies from a contemporary political and diasporic perspective. The second day included presentations by invited guests as well as Rutgers graduate students. Professor Zita Nunes (English and Comparative Literature, University of Maryland), analyzed the multiple lived experiences of James Bertram Clarke, who wrote about the experience of racism in nine different countries under several different names so as to advance a transnational anti-racist struggle. Carolyn Ureña, Fourth Year PhD Candidate, served as a respondent for Professor Nunes’s presentation. 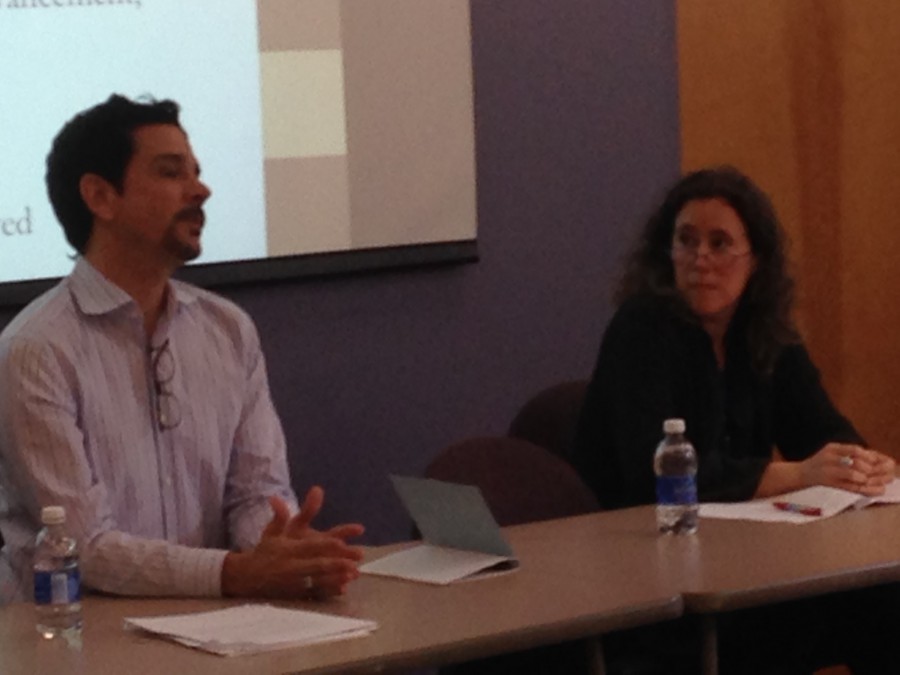 Professor Ada Ferrer (History, New York University), presented her latest research on revolution in the early 19th century Caribbean, with a particular focus on a now-lost book of illustrations and other difficult to decipher symbols created by black Cuban revolutionary José Antonio Aponte. By focusing on the “negative presence” of the book, Ferrer’s work aims to explore the contingency of the archive and its role in revolutionary intellectual history. Professor Don E. Walicek (English, University of Puerto Rico), presented a paper on creolization in Anguilla. Despite being a marginal colony due to not having a plantation system, Professor Walicek argues that creolization still had an important role in the linguistic life of Anguilla. Yolanda Martínez-San Miguel (LHCS & Comparative Literature), as respondent, interrogated whether Maroon communities in Anguilla could also be seen as sources of creolization. The last panel of the conference was composed by Nidia Bautista (Third Year PhD Student in Political Science), who presented an analysis of the location of the intellectual within a community, paying attention to issues regarding the ethics of scholarship, and Carolyn Ureña, who presented a chapter of her dissertation on Toni Morrison and Gabriel Garcia Marquez. Rafael Vizcaino served as moderator and Professor Carter Mathes (English) was the respondent.

Overall, the symposium offered an exciting opportunity for scholars to share their work and engage in energizing discussions about the past, present, and future of the field, solidifying Critical Caribbean Studies as a space where students interested in the Caribbean can find support and collaboration beyond their own disciplinary boundaries.