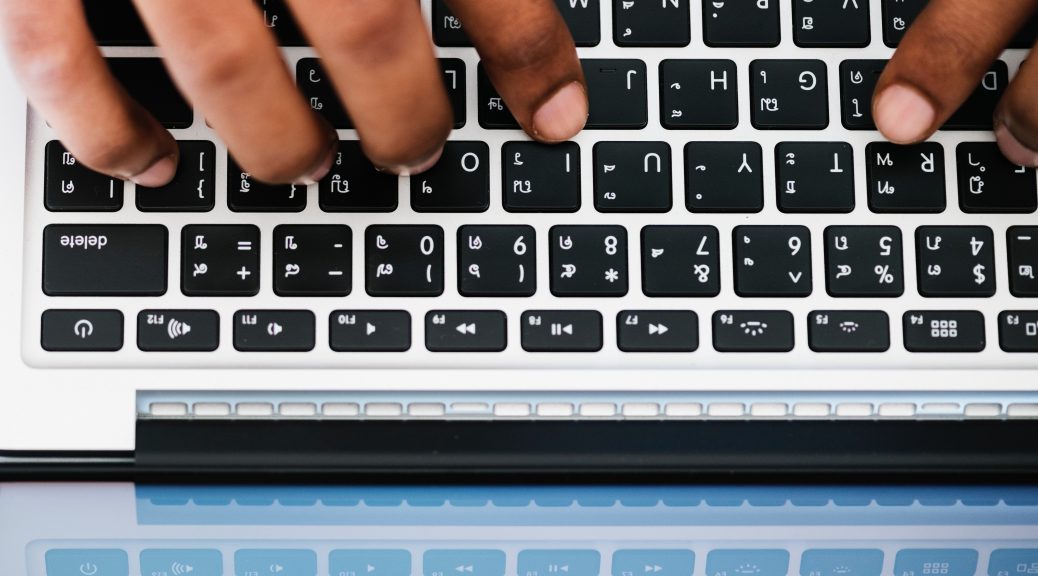 It is inevitable: the sound of hail on a Spring morning will always remind me of the feat of a finished dissertation.

My entirely virtual dissertation defense took place on a cloudy Monday morning, with light hail (March 23, 2020). Members of my committee and I greeted each other from our respective rooms and proceeded to discuss the culmination of seven years of training and writing. Thankfully, the defense went swimmingly and without a glitch. It had been difficult to quiet all that has been going on as I prepared for my defense. The program and my committee members endeavored to make this virtual defense possible, which was no small feat in our present circumstances.

The irony of defending in relative immobility, put in place by the quarantine measures, is not lost on me. My dissertation, entitled “Decolonizing Mobility in the Postwar Transpacific,” examines how conditions of mobility and immobility are unevenly created under military and economic occupations in the Pacific, focusing on South Korea. Engaging the philosophical and literary reflections of East Asian, diasporic, and Native American thinkers and writers on im/mobility, it argues that alternative organization of life is found in the very conditions of immobility.

My committee members shared their questions on the work’s location as well as the use of speculative fictions as an object of analysis. Because each member has been my interlocutor from different fields of study (Decolonial Thought, Korean literature, Comparative Literature, Gender and Sexuality Studies, and Disability Studies), the defense discussions too, took an interdisciplinary shape to reflect such engagements. Although we lacked the audience members of the more customary open defense, it was great to receive engaging questions from scholars whose work has informed my thinking, and no less in a trying time.

Although the defense marks, in one sense, the end of a long trajectory of graduate training, it also marks the beginning of the life of a seven-year-long idea becoming a project of its own standing. I am excited to follow its life from this other side, and I thank all those who made it possible. 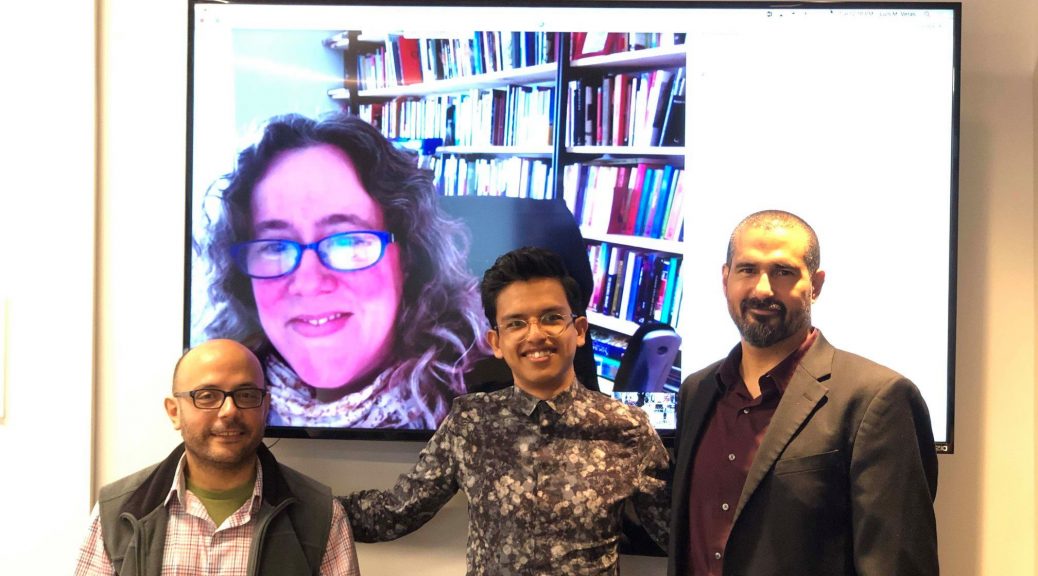 By Yuanqiu Jiang, with editorial input from Rafael Vizcaino

Rafael started off by giving us a quick summary of his dissertation, which offers an interpretation of the notions of “secularity” and “post-secularity” from the perspective of epistemic decolonization. Rafael aims at a re-articulation of the meaning of secularization in modernity, where secularization learns from its own mistakes. Situating his project in Latin America and borrowing tools from decolonial thought, Rafael argues that secularity can be resignified beyond modern anti-religious secularism through epistemic decolonization. The ongoing project of postsecularity, defended by an array of scholars across the humanities and social sciences, can thus also take part in a broader process of decolonization.

In the examination portion of the defense, Professor Linda Martín Alcoff (CUNY Graduate Center) pushed Rafael to articulate how figures like Gloria Anzaldúa prefigure much of contemporary philosophy of science and standpoint theory. Professor Yolanda Martínez-San Miguel (University of Miami), asked Rafael about how he conceives of the relation between aesthetics, the erotic, and the spiritual. Professor Carlos Ulises Decena (Chair of Rutgers’s Department of Latino and Caribbean Studies) inquired about Rafael’s methods and urged Rafael to better articulate the embodied character of writing in the process of knowledge production. Lastly, our very own Professor Nelson Maldonado-Torres, who chaired Rafael’s dissertation, asked about the role of dialectics and opacity in Rafael’s work.

In his thoughtful response to all these comments, the word “trans-disciplinary” emerged as a notion central to Rafael’s own writing and thinking. Rafael invoked the cyberneticist Stafford Beer, whose critique of scholarship Rafael constantly kept in mind while writing his dissertation. The trans-disciplinary moves beyond the disciplinary and the interdisciplinary to think the big picture in an ever-changing world. The project of epistemic decolonization, Rafael argues, presupposes this type of transdisciplinarity, and with this frame, Rafael seeks to make a contribution to theories of modernity, religion, and secularity.

Rafael’s dissertation was acclaimed by Professor Maldonado-Torres as a triad of excellent writing, excellent research, and excellent analysis, which were also powerfully demonstrated in the defense. Felicidades, Rafael! And good luck with the next chapter of your career! 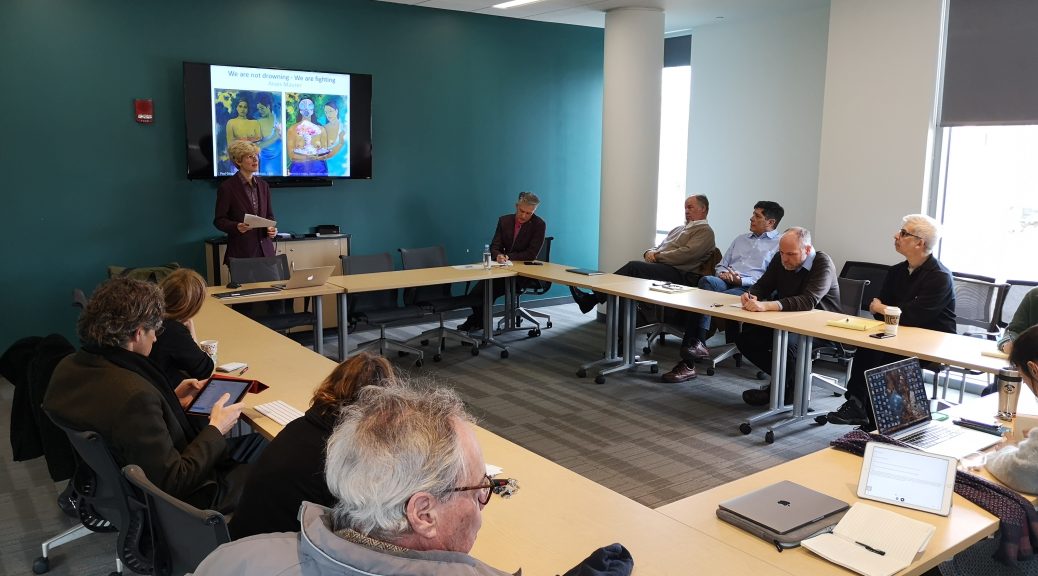 On February 20, the Department of French hosted Dr. Anaïs Maurer for her lecture and job talk: “We Are Not Drowning, We are Fighting: Pacific Poets against Environmental Racism”. As the title of the lecture indicates, Oceanian literary voices have been contributing to protests against environmental racism­­—an ideology, in Maurer’s words, constituting “structural discrimination that racializes people affected by environmental issues”. Racial discrimination underlies the environmental injustice against pacific islanders. As the U.S. nuclear testing sites, many pacific islands are threatened by climate change, water contamination, and species extinction. To put it in Maurer’s own words, pacific islanders are subject to “dispossession, displacement, displacement, and death”. In the face of the environmental destruction and the loss of homeland, academic discourse like “resilience” and “sustainability” sound too conservative to address the issue. In fact, Oceanian people’s reactions should be described as a heroic struggle of survival. Rather than surrendering to helplessness, they display a rebellious spirit through their voice and literature, which can be captured in the title of this lecture: “We are not drowning, we are fighting”. 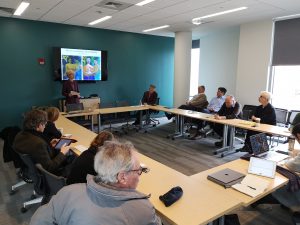 Maurer points out three major consequences coming out of the environmental racism against pacific islanders—the threat of mass migration, the destruction of multi-species society, and the annihilation of racism. Yet in response to each threat, pacific islanders are not helpless victims but proactively act against the discriminating ideology. In the face of the rising sea level threatening the Marshall island, the poet and climate change activist Kathy Jetnil-Kijiner claims, “who do you think will be next? I’m taking you with me”. The poetic articulation reserves the role of pacific islanders as passive victims with a powerful declaration of fighting to the end. The rebellious and emotional response also challenges the western apathy towards the environmental destruction in the pacific islands. Pacific poets refuse the destiny of “invisible disappearance”. Instead, they call into question the very ideological foundation of environmental racism.

Elaborating on pacific poets’ voices against environmental racism, Maurer also brings into light the philosophical significance of their reaction, namely resistance to “Islandism”. As Maurer discerns, islandism is an extension of Orientalism, in which the island represents the opposition of modernity—a place frozen in time and outside of civilization. Therefore, people of the island are seen as barbarians that could be sacrificed or even wiped out for the progress of modernity. The ideology of islandism thus justifies the displacement of violence imposed upon the pacific islanders, and it should be abandoned. Therefore, Maurer puts forward “Oceanitude” as a competing ideology as to challenge islandism in Western thoughts. The shift from islandism to oceanitude intends to bring back emotion, unsettling the dominance of reason in scientific discourse that facilitates environmental racism. Maurer also points out the necessity of realizing this historical instance of environmental destruction so as to avoid such tragedies.

The Q&A section features intriguing dialogues between Maurer and professors and graduate students in the Department of French and Comparative Literature Program. Here is a list of questions worthy of further thinking: how do the environmental studies inform the reading of canonical texts? What is the function of emotion in environmental literature? How does the study of pacific literature expand the definition of French literary studies? How to go beyond print literature and exert a wider influence? Is the philosophy of oceanitude applicable to other disciplines like indigenous studies? I especially enjoy Maurer’s response to the last question. Addressing the philosophical significance of oceanitude, she responses, “the sense of being an islander has always emerged in co-constitution with the sense of living in an endangered environment”. Environment, in her view, becomes a new identity. Let us remember the resonantvoice of the pacific poets while exploring the connection between environment and our own identity.

Dr. Maurer has accepted a tenure-track appointment as  Assistant Professor of French and Comparative Literature. Starting Fall 2020, she will be teaching courses on Francophone/Pacific literatures and in the environmental humanities more generally. 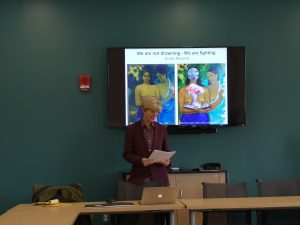