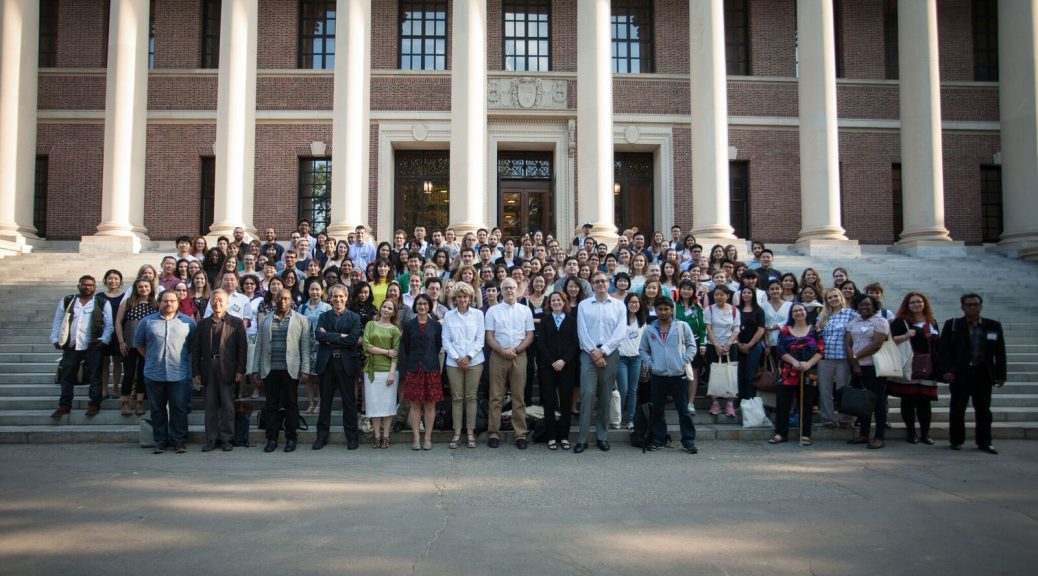 After Beijing (2011), Istanbul (2012), Cambridge/ Boston (2013), Hong Kong (2014), and Lisbon (2015), this summer the Institute for World Literature met again at Harvard. Since its inauguration in Beijing, this summer program has been a place where genuine thinking and heated debates about world literature are happening. Led by David Damrosch, 14 scholars and over 150 student participants from more than 30 countries gathered for intellectual exchanges over the course of four weeks.

This year, the program ran from June 20th to July 14th. Each participant had the chance to choose two from a total of 14 seminars, each of which met four times a week for two consecutive weeks. The seminars were led by prominent scholars in the field; some held broader thematic concerns, such as Eric Hayot’s “The Small and the Large” and David Damrosch’s “Grounds for Comparison.” Some represented more specific topics, such as Bruce Robbins’ “Cosmopolitanism, Atrocity, and Time” and Reine Meylaerts’ “Multilingualism, Translation and World Literature.” Participants were also expected to attend colloquia, panel discussions, and lectures, where they had more time to talk about interests and concerns of their individual research experiences.

As one of the founding members, Rutgers has always been part of this growing program. With Rebecca Walkowitz’s seminar “Close Reading and World Literature” and up to four graduate student participants, Rutgers contributed greatly to this year’s IWL event. Participating as a graduate student from comparative literature, I found the experience at IWL especially valuable for the scope of its theoretical concerns, as well as for the cultural diversity that it represents. Each compressed in two weeks, the two seminars required intense work and preparation. However, IWL granted its participants with free and unlimited access to the Harvard libraries and museums, which proved to be very convenient for study and research. In class, I benefited a lot from professors’ theorization of world literature and the various perspectives that the diversity of my classmates’ cultural background made possible. Thanks to the event’s general atmosphere of friendliness, openness, and generosity, discussion and conversation went beyond the classroom. During office hours there were always lines in the waiting room, and before and after classes small gatherings of chatting students were everywhere to be seen. Another indispensable part of the IWL experience are smaller meetings called colloquia, where participants with similar research interests get together to talk about their ongoing work each week. In my group “World Literature and Translation II,” there were 12 students and scholars. When it was my turn to present, I gave a presentation on the Chinese artist Xu Bing and received many interesting responses. In a more casual atmosphere, colloquia provided participants with an opportunity to think together and help each other, which eventually opens up new perspectives and brings back unexpected inspirations.

In addition to seminars and colloquia, twice a week the IWL hosted lectures and panel sessions given by participating and guest professors. These events  allowed all participants of the program to gather together and meet each other. Many graduate students found the two panels on publication and the job market helpful, and the warm responses during Q&A sessions confirmed the success of the lectures. (Here is a link to the video of some of the lectures of IWL Harvard 2016.) The panel on the job market.

As a bonus for the hard-working participants, IWL also arranged optional museum visits and beach outings, an addition to the fun of staying in Boston. Given the intensity of the program, in recollection I consider the closing of IWL in the middle of this July a start, rather than an end, of a quest for the answers to the many questions the Institute has made me ponder about. I will definitely keep thinking about the themes we have discussed during a very productive month in my future studies, and I look forward to keeping in touch with the friends and colleagues that I have met during the program.